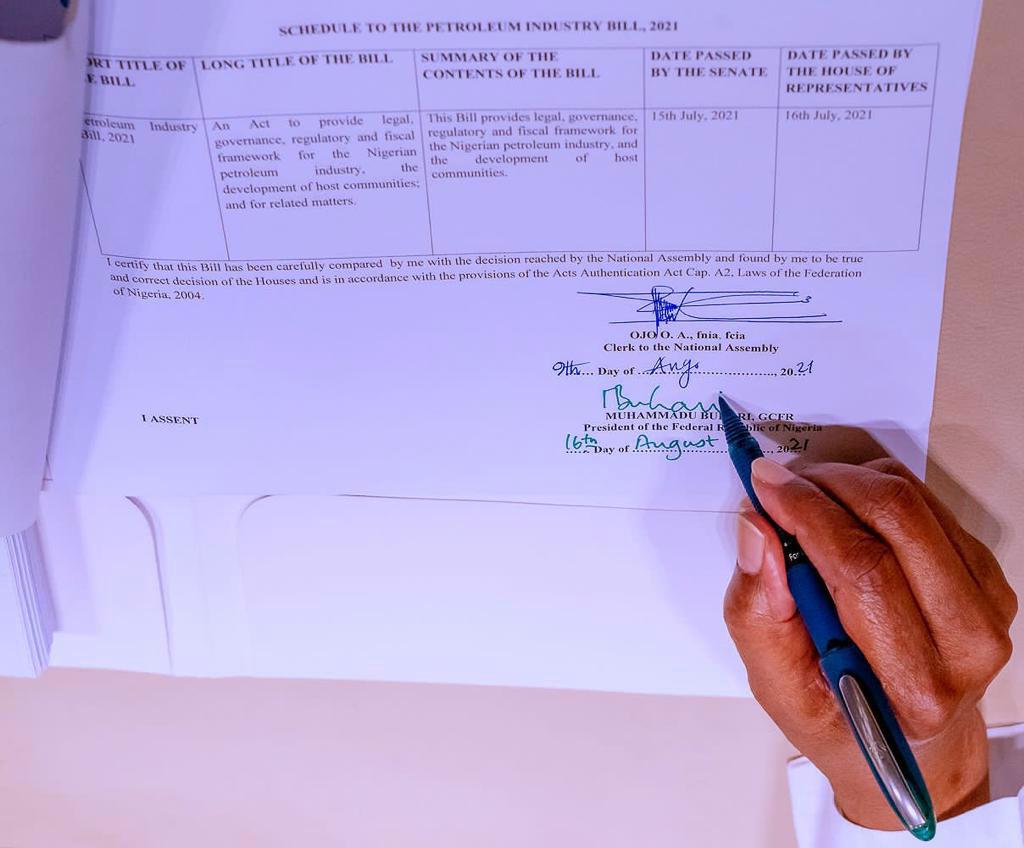 *Signing the PIB into law

*As stakeholders faults 3% for host communities

Port Harcourt — Mixed reactions have begun to trailed President Muhammadu Buhari’s assent of the Petroleum Industry Bill, as stakeholders in the Niger Delta region have expressed mixed reactions on the new Act, over host community funds.

Some stakeholders believed that people of Niger Delta who bear the brunt of crude oil and gas exploitation, have been shortchanged in the new law, following the paltry 3percent allocated to them, in addition to the responsibility of protecting oil facilities.

They are of the opinion that President Muhammadu Buhari would have used his veto power to increase the 3percent earmarked in the Bill, to at least 5percent, as demanded by the Niger Delta people.

However, other stakeholders say the new law, though coming late, was better late than never, as there will always be a room for a
amendments.

Meanwhile, some stakeholders have also accused federal legislators from the region of dishonesty and failing to lobby other members of the Legislature to uphold the 5percent initially demanded by the host communities.

For the Youths and Environmental Advocacy Centre, President Buhari signing the Bill into Law without addressing the concerns raised during the legislation of the Bill, may lead to frictions in the host communities, since the onus of protecting pipelines now rests on the communities with a paltry provision in the Act.

Executive Director of YEAC, Mr Fyneface Dumnamene Fyneface, however urged members of oil host communities to be calm, and to judiciously use the 3percent for community development as there will always be room for amendment to include the needed improvement on the 3%.

“We had expected Mr. President to use his constitutionally-guaranteed veto powers to address areas of concerns in the Bill before accent. These areas include the issues raised by petroleum host communities that the 3% allocated to them was meager.

“This is because the host communities have suffered a lot of environmental pollution, gas flaring and destruction of the Niger Delta ecosystem by oil mining activities and deserved to have a better deal in the oil industry through a better percentage of oil profits.

“After the passage of the Bill by the National Assembly without considering most of the concerns of host communities during public hearings, we had expected that the President would listen to the issues raised by host communities that the 3% was small and at least increase it to 5% as also demanded by the Southern Governors on behalf of the host communities.

“The worries of the host communities were increased on getting to know that 30% of NNPC Ltd profit would be used without public appropriation for oil prospecting in the frontier basin.”

For fishermen in the Niger Delta under the auspices of Artisanal Fishermen Association of Nigeria, ARFAN, the Petroleum Industry Act, assented by the President holds promises for the Niger Delta region.

Coordinator of ARFAN in the Niger Delta, Rev. Samuel Ayadi, said that the Petroleum Industry Act 2021 which became law on Monday amongst other provisions, made it statutory for oil firms to develop and involve communities where they operate.

Ayadi expressed optimism that the new legislation would be implemented to herald a new era in the oil communities and end the situation where oil exploration activities stifled the fishing activities.

Similarly, the King of Ogale community in Eleme Local Government Area of Rivers State, HRH Bebe Okpabi, said the 3percent was a good start, while commending the President for signing the Bill into law.

“For me, the 3percent is okay, let us start with that while we struggled for more. This Bill has been in the National Assembly for years and I thank President Muhammadu Buhari and this current National Assembly.

“The 3percent is not enough, but it is something. For the fact that something is out for the host communities, whether one percent or three percent, let us take it while we can always dialogued for more.”

Meanwhile, an Economist, Mr Nathaniel Friday Udoh, says Niger Delta lawmakers were not honest with the region concerning the Bill, as they did not seek the opinion of experts, but only surrounded themselves with people who have no knowledge of the oil and gas industry.

Udoh who wondered why a medical doctor would be appointed as a Commissioner of Petroleum and Power in Akwa Ibom State, said Niger Delta lawmakers should have lobbied their colleagues from other regions to ensure the host communities get more than 3percent.

He said host communities would end up as the losers despite the 3percent, as much of oil fields productions are declining and most of the oil activities are shifting to offshores and especially the deep water and ultra- deep water.

“Those who had a say on the legislation are the legislators, and especially of the Niger Delta who are dispose to varieties of windows for a legislation that could have best compensate the communities in the region but they were unable to put to good use those opportunities.

“My concern given the 3percent allocation from the revenue from the oil produced from these communities and especially along the most Niger Delta depot belts is declining given to the depletion in reservoir and much expensive to operate aged reservoirs.

“In absolute term, legislators representing the region and the opinion leaders seem to be dishonest with the people, arising from their apathy to experts contributions, which is a disservice to the constituencies they represent.”