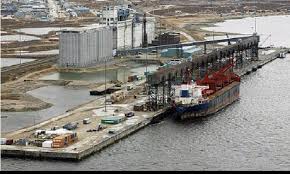 25 August 2018, Sweetcrude, Lagos — Bulk wheat, salt, and frozen fish topped the import chart at the Eastern and Delta ports of the Nigerian Ports Authority, NPA, as a total of 29,437,079 metric tons of cargoes arrived the country last week.

The Eastern ports of the NPA comprise of Port Harcourt and Calabar ports while that of Delta comprises of Warri, Sapele and Koko ports.

A breakdown of the figure showed that bulk wheat alone recorded a total of 14, 234, 782metric tons of cargo, about 48.4 percent of the total cargo throughput all of which occurred in the Eastern port regions alone with Calabar port taking over 99 percent of the total, while a negligible balance came through Port Harcourt port.

Bulk salt recorded 11, 679,649mt of cargo that came in the country through the Eastern ports alone as no salt shipment came through Delta port region.

A shipment of 15,000mt of premium motor spirit, PMS, otherwise known as petrol, was recorded in the shipping documents of both Eastern and Delta ports.

Figures from the daily shipping position of the Port Harcourt Pilot District showed that Bulk wheat recorded a total of 1,449 metric tons while 10,000mt of aviation fuel otherwise known as Jet A1 also came at the time of filing this report.

A further breakdown of the figure showed that while 4,197 metric tons of frozen fish came through Delta ports, the balance of 3,519,900 came in through Port Harcourt port

For containerized cargoes, 4,900 of container-laden goods were brought in through the Eastern ports.

Besides, about 84,00 metric tons of Premium Motor Spirit, PMS, was also brought in thereby topping the chart in Delta ports

On export, the shipping position also indicated that about 17,800 metric tons of crude oil were also exported through the Delta ports in Warri.

A total of 14,926mt of steel product also recorded as an import that came in through Delta port, as about seven vessels were involved in the affreightment of the cargoes.

The document also showed that a total of 21 vessels sailed into both ports during the week being reviewed.

While six vessels sailed to the Eastern flank of the ports, 15 went to Delta ports.

Although Lagos ports still remain the hub of port activities in Nigeria, the lull in import and export businesses in outer ports have been attributed to low and shallow channels and pirates’ activities.

Until recently there was a drop in the movement of vessels in and out of the Warri port but shortly after the Federal Government commenced the dredging of the Escravos channel, port activities have peaked.

Apart from the oil and gas logistics activities in the Onne area of Port Harcourt, the main port in Port Harcourt city played host to virtually all the cargo vessels.

While Sapele and Koko ports are almost moribund, except for Nigeria Customs Service, NCS, formation and the maritime Coordinating office of the Nigerian Maritime Administration and Safety Agency, NIMASA in Sapele port there are no serious port activities in Sapele port.

For Calabar port, the low shallow has remained a major challenge as most vessel anchor at the sea while smaller vessels go back and forth to lighten her