Singapore — Liquefied natural gas (LNG) buyers with long-term contracts are asking their suppliers for extra volumes of the super-chilled fuel pegged to oil prices which are currently much lower than spot prices, several trade and industry sources told Reuters.

Some have requested to load bigger cargoes bought under their long-term contracts instead of turning to the spot market to buy additional cargoes, or have asked for earlier delivery of the cargoes, the sources said. 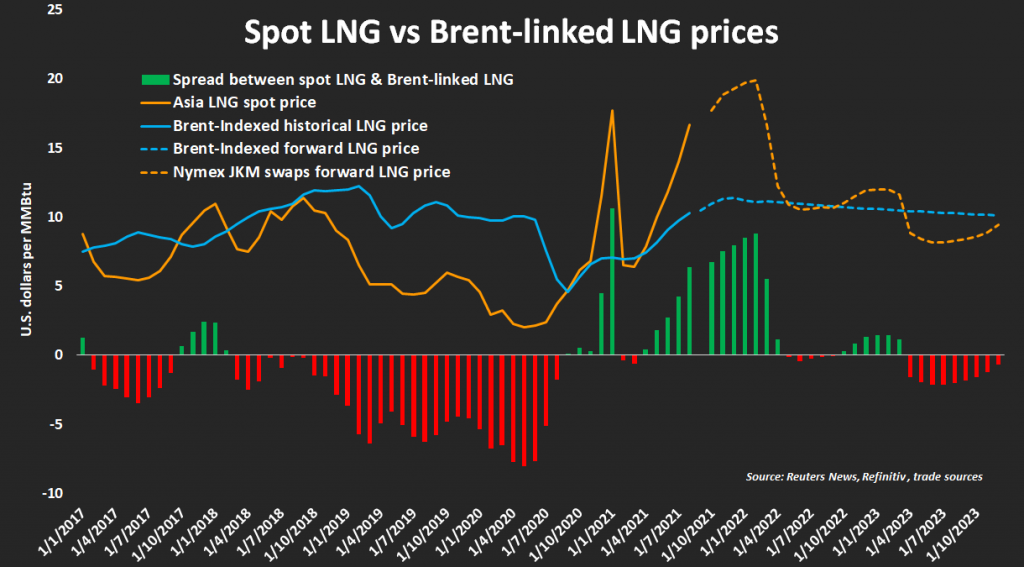 “Oil-linked LNG prices are now about 25% cheaper than spot, so buyers are trying to optimise wherever they can and are buying only what they absolutely need in the spot market,” a Singapore-based LNG trader said, declining to be named as he was not authorised to speak with media.

Asian spot LNG prices are currently trading at about $20 per million British thermal units (mmBtu), the highest ever for this time of year, and may surpass the previous peak reached earlier this year during winter, especially if the weather turns colder than expected.

Spot prices have tripled from this year’s low in February and are nearly 10 times higher than the record lows seen last year.

Some buyers have requested to exercise a contract clause known as Upward Quality Tolerance (UQT), which is typically a flexibility embedded in long-term contracts where buyers are able to request for about 5% to 10% extra volumes, the sources said.

While this is usually negotiated once a year when buyers finalise their annual delivery program with sellers, some contracts allow buyers to request for UQT midway through, one of the sources said.

Buyers are also requesting for some adjustment to the volume of long-term cargoes being loaded on tankers, with some asking for a bit more to be added.

Still, whether sellers are agreeing to these requests depend on availability of cargoes, a source with an LNG producer said.

“Buyers did request, but we have to look at contractual obligations,” the source added.

LNG supply had been curtailed for the past few months due to prolonged maintenance in some parts including Russia and Australia, though the situation is improving, traders said.

Last year, when LNG spot prices dropped to below $2 per mmBtu when coronavirus-induced restrictions slammed gas demand globally, buyers had requested for Downward Quantity Tolerance (DQT), which allows them to take lower volumes of contracted cargoes.

Meanwhile, gas buyers in China and India are turning to domestic gas, prices of which are typically linked to oil, instead of buying in the LNG spot market, traders said.

“Spot prices are just too expensive for buyers right now, so it’s a wait and see situation at the moment,” one of them said.