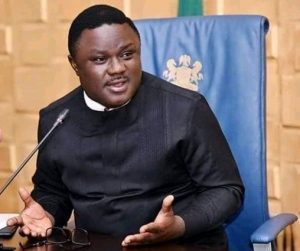 Port Harcourt — Cross State Government has struck a partnership with a French consortium to generate electricity from waste, as part of the waste to energy policy of the Governor Ben Ayade-led administration.
This is coming on the heels of a visit by the French Ambassador to Nigeria, Jerome Pasquier, to the state where he discussed areas of economic cooperation, including waste management and electricity generation in the state.
Leader of the French consortium, Mr. Ayodeji Okele, during a technical meeting with Governor Ayade, said the company would conduct a feasibility studies on the waste management situation in the state.
Okele, speaking on the project guideline, said the team will develop a sustainable solution for disposal of municipal waste, both liquid and solid as well as proffer solutions for the generation of electricity from the end products.
He also announced that his team had earlier undertaken  an inspection tour of the major dump sites in the state.
“We have been having a discussion about this project over a year ago with regards to the waste management situation in Cross River State.
“And we arrived at the idea that we will need to do proper feasibility studies to find out what solution would be best suited  and also what solution will be economically viable.
“The purpose of the feasibility studies, is to have an idea of the technical and financial basis for the project. Our feasibility studies will take about six months.”
Responding, Governor Ben Ayade commended the French government for the partnership, while charging the consortium to see the project as a live saving intervention and not a research.
Ayade who appealed to the French team to hasten the pace of the project, also urged them to see the project as both an existential and humanitarian effort.
“This is not a research, it is a life saving intervention mission and that is why you are here. So, if you approach it from that perspective, your concept of time will become more delicate and sensitive.
“I do not believe that you need six months to do this feasibility study, you just need to put more effort and more time. And why am I saying this? This is because when you finish your feasibility study, you will end up with a position statement which states that it is a feasible project. Then you go back to the French Government to process the actual final milestone which is the actual implementation. So if it takes you six months for feasibility study, by the time you get the final approval it will be towards the end of next year and that is not the level of pulse we need.
“As you are well aware, with what you saw when you went to Lemna, the city has grown to join the refuse, so people are basically living in a refuse dump. So for us, this project is an existential, fundamental and humanitarian effort by the French government because with the dumping of all of the unsegregated refuse, with fire and smoke billowing  from there, that triggers a generation of different types of gases because of insufficient air at the top surface.
“So what you have is the production of methanogenesis producing methane and other associated gases. These are compounds that interfere with the learning capacity of a child. When a child lives in an environment that he or she percieves ordour consistently, retention of knowledge becomes a problem. And so for us three months or at the most four, will be reasonable for a feasibility study that gives us opportunity to go back to the French Government with our proposal in hand that yes, we can do it. So by first quarter of next year we can move into the implementation proper.”