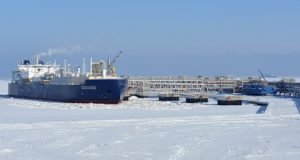 The GasLog Hong Kong LNG carrier, a newbuild vessel chartered by France’s Total that has a 20 percent stake in Yamal LNG, delivered the cargo to Canaport and departed the facility on Tuesday, shipping data provided by VesselsValue shows.

The 174,000-cbm LNG carrier had previously loaded the cargo via a transshipment operation at the Dutch Gate terminal located in the port of Rotterdam.

The transshipment operation took place on July 17 at Gate’s two main jetties and included the direct transfer of the Yamal LNG-sourced cargo from the 172,410-cbm Arc7 ice-class tanker Boris Vilkitsky to GasLog Hong Kong (as shown in the image above).

Even though there have been international media reports saying that this could be another Yamal LNG cargo to land in the US, it turned out that Canada received its first-ever shipment sourced from the giant Yamal LNG project.

And it was not only the first Yamal cargo to Canada but it was also the first shipment from Gate to North America, Stefaan Adriaens, Gate’s commercial manager said on Wednesday.

Gate is one of the main terminals in Europe acting as a hub for further distribution of Yamal LNG volumes.

“It is always nice for a terminal to see a loaded or transshipped vessel reaching a new country. It underlines our flexibility and potential to act as a pivotal point,” Adriaens said.

The Arctic project started shipping the fuel onboard the ice-class tankers that are able to break ice up to 2.1 m thick in December last year.

Previously, these tankers only carried the fuel from the Yamal LNG plant to European terminals for further distribution.

However, as the Arctic Summer began and the ice is not too thick anymore, the ice-class tankers are also now able to deliver Yamal LNG cargoes to Asian-Pacific markets via the Northern Sea Route.

As production is ramping up, the 16.5 mtpa Yamal LNG facility recently also reached the third millionth ton shipped on the 41st cargo. These cargoes were loaded from the plant’s first LNG train with the two other units expected to be online within the next five months.

Destination-wise, Yamal LNG cargoes landed all over the world and Canada is the newest market to receive volumes from Novatek’s project.

“This LNG shipment proves that our long-term corporate strategy is right – we are able to supply affordable, secure, clean-burning energy at competitive prices to all global markets,”Mark Gyetvay, Novatek’s finance chief said on Wednesday commenting the first Yamal cargo to Canada.