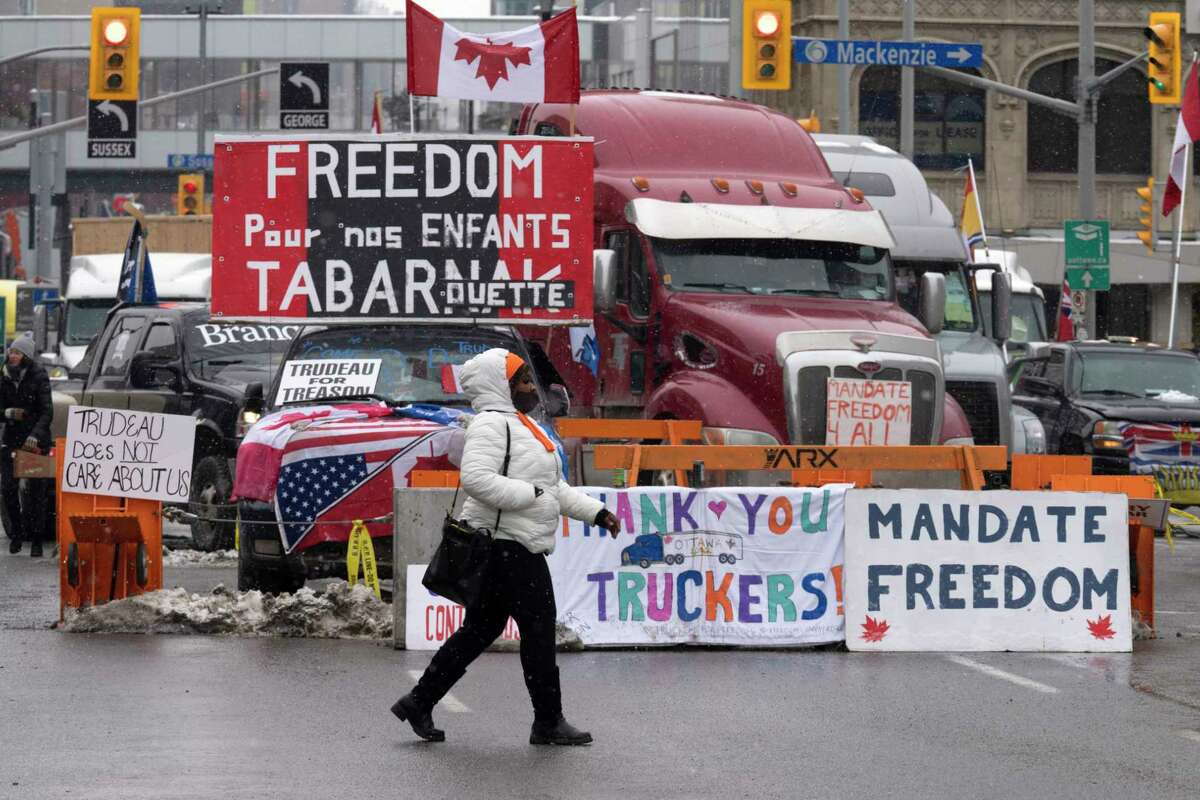 *A woman crosses the street in front of vehicles parked as part of the trucker protest, Tuesday, Feb. 8, 2022 in Ottawa. Canadian lawmakers expressed increasing worry about protests over vaccine mandates other other COVID restrictions after the busiest border crossing between the U.S. and Canada became partially blocked. Adrian Wyld /The Canadian Press via AP)Adrian Wyld/AP

Lagos — Ottawa, the capital city of Canada, has been the hotbed of the far-rightwing-inspired Canadian truckers’ protests tagged #FreedomConvoy2022 since late January. The #FreedomConvoy2022 started as a protest against mandatory vaccinations for truckers to cross the border into the United States and has grown into broader dissent against the Justin Trudeau-led Government thereby portraying the actions as some sort of anti-vaccination movement.

The protests have since become an occupation. The past days have seen thousands of demonstrators and supporters – mainly truckers – flood the streets and the open space in front of the Canadian Parliament Buildings parking more than 100 trucks across several highways and facilities. These actions had led the Canadian police to declare the protest as a “siege” or “insurrection” and the Ottawa authorities to declare a state of emergency.

The protests have revealed a lot. Mr. Trudeau was quoted to have “mocked” the Indian government’s handling of the farmers’ protests in Delhi. The Indian protesters used the PM’s quotes freely during their protests. Like the Ottawa protests, Indian protesters blocked roads, facilities, and other public utilities. Despite the challenges faced by other Indian citizens at the time, Mr Trudeau, being one of the loudest world leaders offering ideas to the Indian government as to how best to handle the protests, said (in 2020): “We are worried about families and friends. Let me remind you, Canada will always be there to defend the rights of peaceful protesters. We believe in the process of dialogue. We’ve reached out through multiple means to the Indian authorities to highlight our concerns.”

Can Mr. Trudeau live up to his own standards? During the Indian farmers’ protests, it was the government’s fault – how the crisis was handled. How then has Saint Trudeau handled the Ottawa truckers’ protests?

Let’s hear what he had to say when he tweeted a few days ago on the #FreedomConvoy2022 protests. He said the protesters “are trying to blockade our economy, our democracy, and our fellow citizens’ daily lives. It has to stop.”

Really? Where are the much-touted rights to freedom of expression that Canada always tells us about in Africa? Aren’t road blockades as we saw during #endSARS in Nigeria too part of these human rights? Don’t other citizens whose daily incomes are affected by blockades have their rights too? During the #endSARS protests, other Nigerians were told to endure the “temporary pains” for the greater good. If Nigerians endured close to three weeks of such blockades, Canadians too should have no qualms to make such sacrifices for democracy!

There is nothing any African or Asian government would have done to stop the uprising that the Canadian state has done. Cutting of protesters’ funding, arrests, curfew, the use of force, propaganda, just name it. Yet, there has been so far, no outcry from the all righteous US media especially CNN. This leads me to the question of West’s interventionism.

Two of the most vocal interventionist books I’ve read are Paul Collier’s Wars, Guns, and Votes and John Campbell’s Nigeria: Dancing on the Brink. Though both books were published about a decade ago, the ideas therein are still much relevant. They wrote on the challenges of democratic experiments in developing countries. One interesting thing about both books is their unapologetic justification of Western interventionist solutions (including military coups to remove democratically-elected leaders in Africa who falls short of Western standards of democracy). Professor Collier, for instance, argued that for him “democratic values are universal” (p.8). As an unapologetic interventionist, Professor Collier places much emphasis on continued external assistance from developing countries including support for military intervention providing stabilizing force in democratic developments in Africa. For him, “military intervention, properly constrained, has an essential role, providing both the security and the accountability of government to citizens that are essential for development” (p.10).
Curiously, the books’ presentation of the West’s holier-than-thou approach and self-appointed moral compass for African states. Ambassador Campbell writes on the US refusal to openly oppose President Olusegun Obasanjo’s ambitions to illegally extend his term in office in 2005 saying “Nigerians…in general overestimate US influence over everything … gave us disproportionate credit for the defeat of Third Term rather than … themselves.” (p.94). Even by his own admittance, the US did nothing concrete to stop this even though it “undermined our identification with democracy with democracy and the rule of law” (p.95).

One aspect not often talked about with the West’s insistence on external interventions in developing countries is the fact that the former does not always live up to their own standards. Historical and more recent developments in Africa and Asia prove this. The world watched the West and the US install Mobutu Sese Seko as President of Zaire (now the Democratic Republic of the Congo) and maintained him in power for over three decades. The US and the likes were well aware of all his brutalities but as long as he allowed them to freely mine Congolese vast natural resources and profess to be “anti-Communist”, Mobutu can stay as long and brutally as he wanted in Zaire. Mobutu was removed after the Cold War ended in the early 1990s when he’s outlived his usefulness. Mobutu was never a democrat – and never pretended to be one – but a bloodthirsty dictator worse than Joseph Stalin. Mobutu himself soon (or earlier) realized he was only used to fighting US Cold War in Africa. Little wonder he’s the instrument used to kill the legendary Patrice Lumumba a few months after Congolese independence in 1960.

The United Fruit Company (UFC) – a US multinational corporation – was responsible for destabilization efforts in Central America with massive support from the Central Intelligence Agency (CIA) over control of banana plantations. Using fictitious or forged newspaper reports and anti-communist propaganda techniques, the UFC working closely with the CIA brought down several governments including President Jacobo Arbenz-led government in Guatemala just because he supported his country’s workers’ demands for better working conditions and pay from the company in the country’s banana plantations. So much for interventionism!

Why will Western countries not hold themselves to their own unusually high standards? Why did Canada seize the GoFundMe account which has raised Canadian $7 million from various sources to the protesters? Why were the Canadian authorities trying to choke off the supply lines of food, fuel and other goods that have sustained the protesters? Why are the Twitter accounts of the protesters (or sympathizers) heavily monitored or in some cases, banned for “perpetrating hate crimes”? The Ottawa police said it has launched 60 criminal investigations, issued hundreds of tickets, towed vehicles and made at least 20 arrests since last week. Why arrest “peaceful protesters”? Why threaten anyone attempting to supply the truckers with fuel or other logistics with criminal charges? Could Mr. Trudeau and his Western allies have tolerated this if done in Africa or Asia? Or, is Canada exempted from this rule?

The government’s official reasons for blocking the protesters’ funding were that it suspected foreign sponsorship. Does that mean it’s OK and “supporting human rights” for foreign funding/donations – or interventions – to protests in African/Asian countries but it’s “insurrection or treason” to do the same to Canada? Shouldn’t be as Thomas Harris’ book says: I’m OK – You’re OK? If you could be OK with foreign interventions in other countries, you should be OK with it in yours too. That way, Dr. Harris says, everyone is Staying OK!

If blocking major roads or other public facilities or causing discomforts to other citizens under the guise of protests in Canada isn’t ok, it shouldn’t be ok anywhere else. If not for the double-faced Trudeau’s morality which is now facing karma, there is nothing peaceful about denying other citizens their rights simply because others are protesting. One’s right to freedom of association must never prevent other people’s rights to freedom of movement. Both are rights guaranteed by the constitution and the United Nation’s Universal Declaration of Human Rights. For over two weeks, some people blocked major roads in Nigeria, to the West and Canada, it’s about their right to protest: it’s human rights. It doesn’t appear we are ready for this conversation!

Canada’s case with the Ottawa protesters is analogous to what Jesus Christ said in Luke 4:23 “Ye will surely say unto me this proverb, ‘Physician, heal thyself’.” The key lesson I learned from the Ottawa protests is: Whatever you cannot take, don’t expect others to take it. Mr. Trudeau should apply his own “process of dialogue” now in handling the #FreedomConvoy2022 now for the world to learn how best to deal with such situations!
NB: Nothing in this write-up should suggest the writer is in any way in support of the anti-vaxxer demands of the #FreedomConvoy2022. He, however, supports their rights to legitimately express themselves and without the denial of other citizens their rights to freedom of movement and other rights under the Universal Declaration of Human Rights.

*Olalekan Adigun, an Accidental Writer, sends this piece from Lagos. He can be followed on Twitter using @MrLekanAdigun