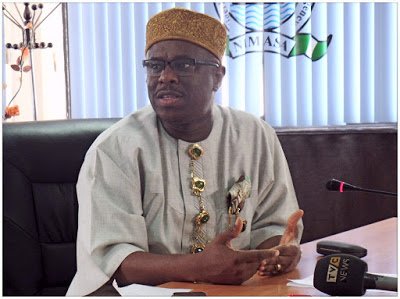 24 November 2017, Sweetcrude, Lagos — The Director-General of the Nigerian Maritime Administration and Safety Agency, NIMASA, Dr. Dakuku Peterside, has said that capacity building initiatives and sectorial reforms are critical elements that can address maritime security issues in the Gulf of Guinea.

Speaking at the G7 high-level meeting on maritime security in Rome, Italy, Dakuku said that despite the security challenges being faced in the region, efforts have been put in place by stakeholders and other government agencies to contain the situation.

The NIMASA boss, who is also the Chairman of the Association of African Maritime Administration, AAMA, noted that piracy attack in the Gulf of Guinea has reduced tremendously as statistics shows that attacks oil and gas installations both onshore and offshore reduced from 36 in the first half.

He also stated that the maritime security architecture in the Gulf of Guinea had political, strategic, regional, multinational and national components, aimed at enhancing security in the region.

The strategic operational headquarters to coordinate the implementation of the maritime security architecture in the region are located in Abuja, Nigeria; Libreville, Gabon; Luanda, Angola; Pointe Noire, Congo; and Yaoundé, Cameroun.

The NIMASA boss urged leaders of countries in the Gulf of Guinea to effectively communicate developments in the region to international partners and also begin to put in place measures that translate visible results.

He said some of the efforts being put in place by the NIMASA to curb piracy activities in Nigeria includes sponsoring Anti-Piracy Bill in the National Assembly to enhance the legal framework to fight piracy, establishment of a NIMASA-Navy Maritime Guard Command Unit to enhance implementation of some of the provisions of UNCLOS Law, capacity building programme to enhance human and infrastructural capacity, amongst others.

“Let me also inform you that as part of our determination to stamp out piracy and all forms of criminal activities, NIMASA is pushing for early passage of an anti-piracy law; the draft bill is before the Federal Executive Council ready to be sent to the National Assembly”, he said.