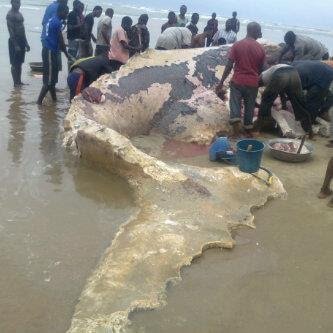 Port Harcourt — The Centre for Environmental Preservation and Development, CEPAD, says dead fishes littering the Atlantic coastline of the Niger Delta region, is caused by sludge and chemicals discharged as wastes from SPDC’s operations at the Forcados oil export terminal.

Recall that dead croaker fishes, arising from suspected hydrocarbon pollution from oil firms operating offshore, since February 2020, have continued to litter the Atlantic coastline of the region, a development experts have warned could lead to extinct of the fish specie.

Although there has been speculation that there was a leak from one of the platforms operating offshore Bayelsa, however, no oil firm has admitted having an oil leak from their offshore operations.

This is as the National Oil Spill Detection and Response Agency, NOSDRA, recently said it found no oil spills linking the death fishes littering the Atlantic coastline in Delta, Bayelsa, Rivers and Akwa Ibom, though it has launched investigation into the issue.

But CEPAD maintained that that while the dead fishes were not caused by oil leakage as found out by NOSDRA, the disclosure was capable of misleading conclusions as the investigation results were being awaited by stakeholders.

Chairman, Board of trustees of CEPAD, Furoebi Akene, alleged that Shell Petroleum Development Company discharged toxic materials into the Atlantic off Delta coastline at Ogulagha, in Delta State.

Akene maintained that the fishes were dying as a result of wastes from SPDC operations and not from oil spills, while berating NOSDRA for allegedly downplaying the issue and trying to divert attention.

He called on Governments of the affected states of Delta, Bayelsa, Rivers, Akwa Ibom, Ondo and their respective National Assembly members and State Assembly members to carryout an independent investigation into the cause of the dead fishes.

According to him, “It has also become a common knowledge that, the Shell Petroleum Development Company of Nigeria Limited SPDC discharged sludge mixed with chemicals into the waters of the Atlantic Ocean.

“The discharge through one of their waste disposals pipes from the Forcados Terminal around Ogulagha and that it was not oil spill from any of the trunk line pipes conveying crude oil from the Forcados terminal.

“The conspiracy between SPDC and NOSDRA which has become very strong since the Director-General of NOSDRA is making all efforts to down play the act and divert attention.

“It is heart breaking and surprising that the Federal Government Regulation Agency , the National Oil Spill Detection and Response Agency, NOSDRA, is just waking up with a press release.

CEPAD while calling on NOSDRA to live up to its responsibility, wondered why the agency was just waking up to issue a press statement in April, whereas the issue has been on since January 2020.

“The NOSDRA Director-General himself Mr. Idris Olubola Musa acted belatedly almost three months since the incident happened around the end of January 2020, having earlier given the excuse that the COVID-19 was a hindering him.

“Not only the belated nature of the response but the premature position while the results are awaited is intended to shield or conceal the real cause of the matter, the facility that caused it and the owners of the facility.

“This is quite unfortunate of a regulation agency. We are using this medium in appealing to NOSDRA to for once do the right thing as they are statutorily mandated to do.

“In the same vein we are urging the Governments of the affected states of Delta, Bayelsa, Rivers, Akwa Ibom, Ondo and their respective National Assembly members and State Assembly members to rise up to their responsibilities to pursue this matter to its logical conclusion for the lives of their citizens.”

Meanwhile, the management of SPDC is yet to respond to these allegations raised by CEPAD.