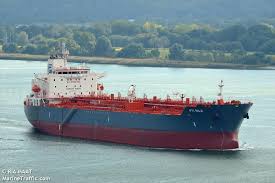 Reports state that the crew all managed to retreat into the citadel and are all accounted for.

The vessel remains stationary in the position of the alleged incident 115nm South Lomé with a Togolese patrol vessel on site.

The Hong Kong flagged M/T PTI NILE was conducting a northerly transit inbound Lomé when she was attacked. Reporting indicates that the vessel was boarded.

The vessel can be seen to be in transit north with the M/T MAERSK NAVIGATOR 4.6nm to her West on a parallel routing.

The M/T NILE appears to conduct evasive manoeuvres to her starboard side initially before coming to a halt.

Whilst precise details regarding the nature of the attack and the welfare of the crew remain unclear, this incident is the second incident within 24hrs within the wider Gulf of Guinea area following a month’s hiatus of serious offshore incidents.

Incidents of offshore kidnap are currently tracking below the 2019 rate for this time of year.