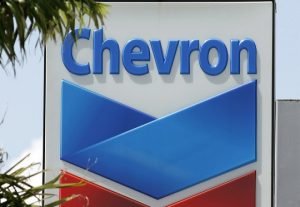 Oil companies are expected to benefit from a bounce-back in oil and gas prices after a one-two punch of falling demand and prices put the industry in a tailspin last year. But as Chevron’s final quarter showed, pandemic-related travel restrictions continue to hammer fuel demand.

The company was quick to respond to the downturn last year, cutting up to 15% of its global workforce, slashing new project outlays more than a third, and pulling back on oil production goals. It used a relatively strong financial position to acquire Noble Energy for $4.2 billion in stock and the assumption of $8 billion in debt.

“While we’re optimistic about vaccines and getting on a pathway to recovery, we’re not there right now,” Breber said. “We still have an economy that’s operating well below capacity. We still have inventory levels that are high.”

U.S. President Joe Biden’s executive order to temporarily suspend oil and gas leasing on federal lands will not “get in our way anytime soon” in the Permian Basin, the top U.S. oil field, where about 10% of Chevron’s acreage is federal, Breber said.

“We don’t agree that it’s good policy to be overly restrictive on federal lands,” Breber said. “If it continues we think that will push energy production outside the country.”

The second-largest U.S. oil producer reported an adjusted loss of $11 million, or 1 cent per share, compared with a profit of $2.8 billion, or $1.49 per share, a year earlier. The net loss was $665 million including acquisition costs, the effect of foreign exchange and pension payouts.

Results missed analysts’ expectations for a per share profit of 7 cents a share, according to data from Refinitiv IBES.

The refining business was “very weak with losses in both international and U.S.,” said Anish Kapadia, director of energy at London-based Palissy Advisors. Chevron’s international production business helped offset weakness in the United States, though, and the company had “good underlying cash flow from operations in a still tough environment.”

Improved oil and gas prices and a 6% increase in output from the Noble purchase boosted Chevron’s oil and gas earnings to $501 million, compared with a loss of $6.7 billion a year earlier.

The gain came as Chevron’s international production business sold oil for about $40 per barrel, up from $39 in the prior quarter and down from $57 a year earlier.

The company’s refining and chemical business reported a fourth-quarter loss of $338 million compared with profit of $672 million the year prior. Fuel sales fell 11% from the year-ago period as COVID-19 travel restrictions continued to reduce demand.

Its closely watched cash flow from operations was $2.3 billion, short of covering the $2.5 billion dividend and $3.2 billion in capital spending for the period.

Chevron has said it plans to spend $14 billion this year on projects and about $15 billion annually through 2025, well below the prior forecast of up to $22 billion.

It will operate five drilling rigs in the Permian this year, down from about 20 pre-pandemic, and does not expect to boost activity there this year, Breber said. “We don’t think our shareholders want us to grow production in a world that has excess supplies,” Breber said.

Chevron is expected to go over the results on a call with analysts later in the day.

(Reporting by Jennifer Hiller in Houston and Shariq Khan in Bengaluru; editing by Nick Zieminski and Steve Orlofsky)