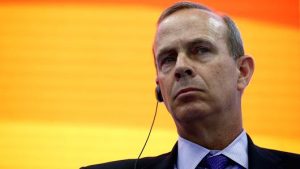 Houston, Texas — Chevron Corp’s first-quarter profit fell 27 percent from a year earlier due to lower crude oil prices and weaker margins in its refining and chemicals businesses, but topped forecasts and signalled it is committed to buying smaller rival Anadarko Petroleum Corp.

The No. 2 U.S. oil and natural gas producer this week found itself in a takeover duel for Anadarko, a smaller oil and gas producer, when Occidental Petroleum Corp made a $38 billion offer that topped Chevron’s $33 billion bid.

Chevron’s oil and gas production rose during the quarter, and profits in its U.S. exploration business jumped 15 percent from a year earlier. But weakness in refining and international exploration knocked overall profit down 27 percent on a 6.8 percent decline in revenue.

Wirth signalled that Chevron considers itself on track to make a deal for Anadarko. He said combining the shale, deepwater and liquefied natural gas businesses of the two companies “will unlock significant value to shareholders.”

“We would not be surprised to see Chevron raise its offer,” they said in a research note on Friday, saying the company’s bid will “ultimately be the successful one.”

Chevron’s daily production of oil and gas rose to 3.04 billion of barrels, from 2.85 billions of barrels in the year-ago period. But the price for each barrel of U.S. crude oil and natural gas liquids fell to $48 from $56 a year earlier. Chevron’s take from international output, slipped to $58 per barrel from $61 a year earlier.

Rival Exxon Mobil Corp on Friday reported its earnings were well below analysts’ estimates, citing the effects of weaker crude prices, heavier maintenance and weaker margins in its refining and chemicals businesses.