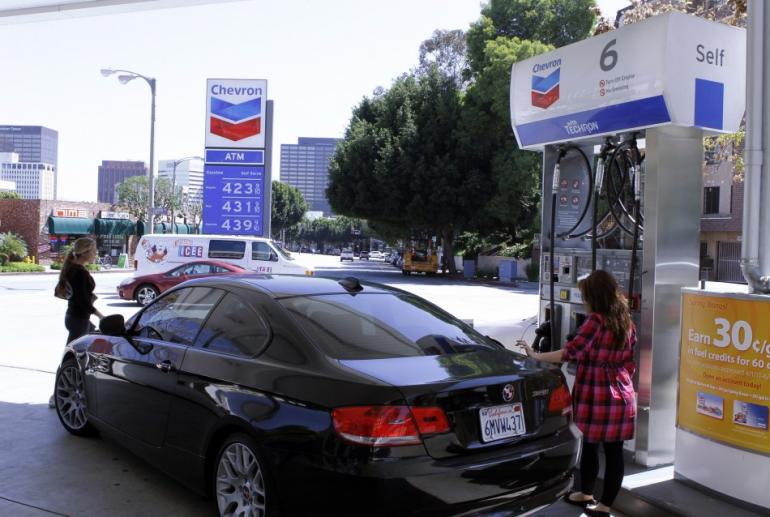 *A motorist refueling at a Chevron gas station.

27 October 2017, Sweetcrude, Lagos — Chevron’s shares fell by 1.2 percent to $117 at the premarket trading on Friday due to output decline.

According to stock market’s data, the company’s stock grew less than 1 percent this year.

The International Oil Company, IOC, declared an unexpectedly low profit on Friday as its U.S. production drops, counteracting a rise in oil and natural gas prices.

One-time items is an accounting item in a company’s income statement that is non-recurring in nature. In order to get a true gauge of a company’s operating performance, one-time items are usually excluded by analysts and investors while evaluating a company.

However despite fall in returns and spending on large projects being held back, Chevron said its results were moving in the right direction.

“We continue to see improvement in the underlying pattern of earnings and cash flow,” said Chief Executive John Watson, who will retire early next year.

Chevron’s production was not affected by the hurricane.

Meanwhile, ExxonMobil’s third quarter profit surprised shareholders despite the hurricane Harvey which affected many of its largest refineries in August, as its shares rose nearly 1 percent to $84.14 in premarket trading.

The stock has lost about 8 percent of its value so far this year.

The company’s production of oil and gas also increased, boosted by higher pricing even in the United States despite the storm.

“A 50 percent increase in earnings through solid business performance and higher commodity prices is a step forward in our plan to grow profitability,” Darren Woods, Exxon’s chief executive officer, said in a statement.

By that measure, analysts expected 86 cents per share, according to Thomson Reuters I/B/E/S.

The IOC’s production rose about 2 percent to 3.9 million barrels of oil equivalent per day.