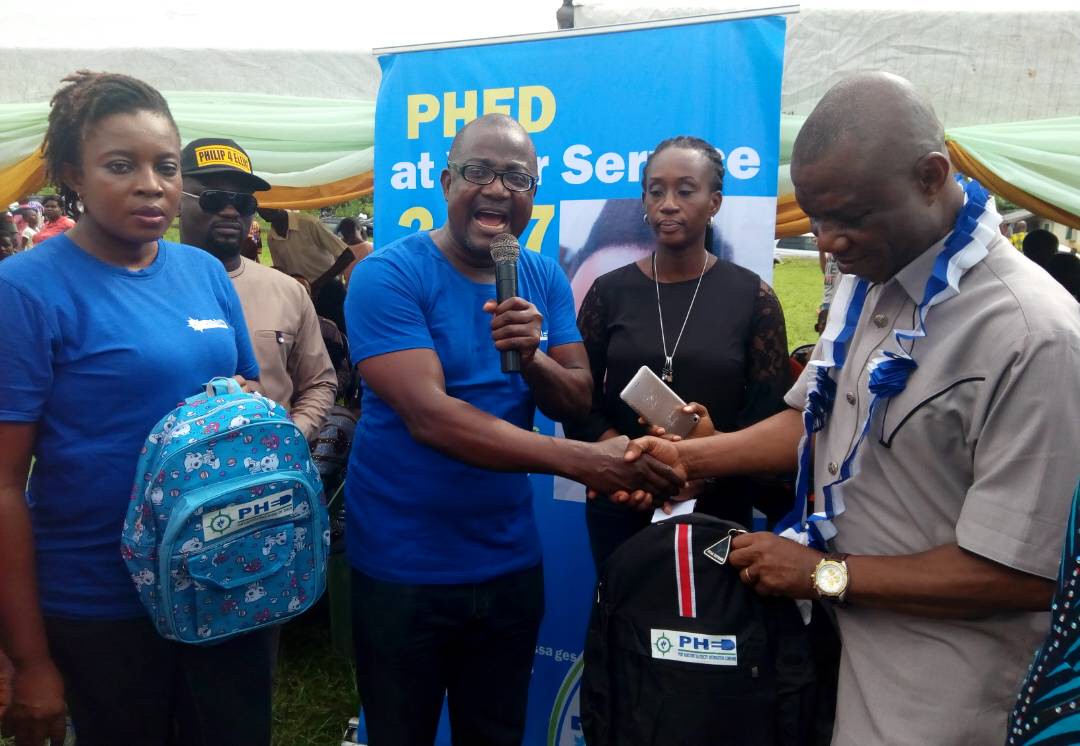 *Officials of PHED handing over the school bags to Eleme council boss in Rivers state.

27 May 2018, Sweetcrude, Port Harcourt — As Nigeria joins the rest of the world to mark National Children’s Day, the Port Harcourt Electricity Distribution Company, PHED, has donated over 1000 school bags and school accessories to children in the four states of its operation.

In this year’s celebration, the school children in rural areas are the main target, hence the distribution simultaneously took place at Eleme in Rivers, Abak in Akwa Ibom, Sagbama in Bayelsa and Akamkpa in Cross River state.

Speaking on the donation of the items in Port Harcourt, the Chief People Officer, PHED, Mr. Mobolaji Ajani, stated that educational development was one of the company’s corporate social responsibility focus.

Ajani said PHED’s participation in this year’s children’s day celebration is a clear departure from how it has been done in the last two years where those at the state capital were beneficiaries.

“As a mark of our support for children’s education, PHED has deemed it fit to donate over 1000 bags with associated writing materials; pencils, crayons and rulers.

“This gesture may not seem much, but be rest assured that it is our desire to support education across the four states of our operations in Rivers, Bayelsa, Akwa Ibom and Cross River.”

The PHED boss further said that the company would continue to engage in other projects designed to improve the socio-economic growth in the region.

“We hope that you will receive our little gifts as we look forward to offering greater support and better packages for these children as we join them in celebrations next year.”

Receiving the items for the children, the State Commissioner for Social Welfare and Rehabilitation, Mr. Damiete Herbert-Miller, commended the management of PHED for their contribution in encouraging pupils in the state through the donation of the gift items.

He thanked PHED for the kind gesture and hoped that the company would continue in that regard as promised in the CPO’s speech.

Similarly, the Caretaker Chairman, Eleme Local Government Area, Mr. Godwin Abey-Ollor, who received the gift items for children in Eleme, expressed joy over the gift items from PHED, noting that it came at the right time.

Abey-Ollor also called on other companies operating in the state to emulate the gesture of PHED.

“Thank you PHED for this kind gesture. We are grateful that they found us worthy, they left the city to come and celebrate the children’s day here.”

It should be noted that the theme for this year’s children day celebration is “creating safe spaces for children: our collective responsibility.”