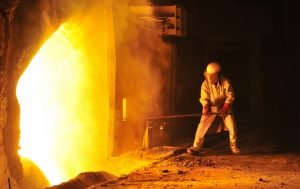 Beijing — Mills in China, the world’s top steel producer, churned out 81.24 million tonnes of crude steel last month, up 1.3 percent from June and 7.2 percent from the same month last year, data from the National Bureau of Statistics have shown.

“The reason we didn’t see declines in steel output amid the environmental crackdown is that steel mills have improved their production efficiency by using higher grades of iron ore and adding more scrap steel to churn out more products,” said Wang Yilin, an analyst at Sinosteel Futures.

Daily average output fell 2 percent from June to 2.62 million tonnes in July, according to Reuters calculations based on the official data. July has one more day than June.

Profit margins at Chinese steel mills touched around 1,100 yuan ($159.59) a tonne, near the record levels of last December, according to analysts from Huatai Futures.

The margins are supported by strong demand from downstream users and ongoing supply-side reform, as well as environmental measures that have helped to eliminate low-cost producers from the market, the Huatai analysts said.