Lagos — China plays a significant role by adding a capacity of 3.25 mtpa by 2026 among the Asian countries. It contributes around 51% of the total capacity additions in Asia by 2026, says GlobalData, a leading data and analytics company. 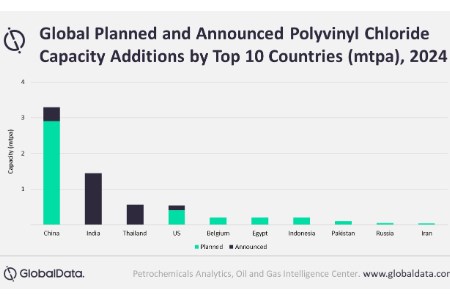 GlobalData’s report, ‘Polyvinyl Chloride Industry Installed Capacity and Capital Expenditure (CapEx) Forecast by Region and Countries including details of All Active Plants, Planned and Announced Projects, 2022-2026’, reveals that China is likely to witness start of operation of six planned and announced projects by 2026, adding a capacity of 3.25 mtpa. Of this, 3.10 mtpa would be from the planned projects while the rest of the additions is from announced projects.

Vinuthna Bidar, Oil and Gas Analyst at GlobalData, comments: “In China, majority of the capacity additions are from Tianjin Bohai Chemical Development Company Tianjin PVC Plant, with the capacity of 0.80 mtpa. It is expected to commence production of polyvinyl chloride in 2022.”

Shenhua Yulin PVC Plant is the second highest contributor in terms of capacity additions with a capacity of 0.50 mtpa by 2026. It is operated by China Shenhua Energy Co Ltd.