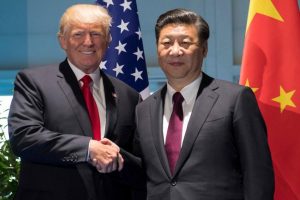 US President Donald Trump and Chinese President Xi Jinping (R) shake hands prior to a meeting on the sidelines of the G20 Summit in Hamburg, Germany, July 8, 2017. Saul Loeb, Reuters

12 December 2018, News Wires — China and the United States discussed a road map for the next stage of their trade talks on Tuesday during a telephone call as a report that China is moving to cut tariffs on American-made cars boosted automakers’ shares.

U.S. President Donald Trump and Chinese President Xi Jinping agreed at a Dec. 1 meeting in Argentina to a truce that delayed a planned Jan. 1 U.S. increase of tariffs to 25 percent from 10 percent on $200 billion worth of Chinese goods.

A U.S. Treasury spokesman confirmed that the call took place, but offered no further details. Meanwhile, automakers’ shares rose after a Bloomberg report that China is moving to cut import tariffs on American-made cars to 15 percent from the current 40 percent.

Reuters could not immediately confirm the report.

Trump, without providing details, wrote in an early morning post on Twitter: “Very productive conversations going on with China! Watch for some important announcements!”

White House adviser Kellyanne Conway welcomed the auto tariffs report but did not confirm it. “It’s really great news, and I hope our friends in the auto industry see it that way as well,” she told reporters at the White House.

The U.S. Trade Representative’s office did not immediately respond to a query about the call with the Chinese.

China’s commerce ministry said, “Both sides exchanged views on putting into effect the consensus reached by the two countries’ leaders at their meeting, and pushing forward the timetable and road map for the next stage of economic and trade consultations work.”

Lighthizer said on Sunday that unless U.S.-China trade talks wrapped up successfully by March 1, new tariffs would be imposed, clarifying there was a “hard deadline” after a week of seeming confusion among Trump and his advisers.

The Wall Street Journal, citing people familiar with the issue, said Liu planned to go to Washington after the new year.

The Harvard-educated Liu, Xi’s top economic adviser, is leading the talks on the Chinese side.

In comments reported separately by China’s foreign ministry, the government’s top diplomat, State Councillor Wang Yi said, “If China and the United States are antagonistic, then there are no winners, and it will hurt the whole world.

The United States should look at China’s development in a more positive light, and constantly look to “expand the space and prospects for mutual benefit,” he told a forum.

Some global financial markets have been jittery about the clash between the world’s two largest economic powers over China’s huge trade surplus with the United States and Washington’s claims that Beijing is stealing intellectual property and technology.

The recent arrest in Canada of a top executive at China’s Huawei Technologies Co Ltd [HWT.UL] has also roiled many world markets amid fears it could further inflame the China-U.S. trade row. Hours before a bail hearing in the case, a former Canadian diplomat was detained in China, two sources said on Tuesday.