Lagos — The upstream businesses of the national oil companies (NOCs) in China are the most affected amongst the Asian NOCs’ peer group when assessed against the short-term impact of COVID-19 and the weakened oil prices, says GlobalData, a leading data and analytics company.

Cao Chai, Oil and Gas Analyst at GlobalData, comments: “The China National Petroleum Corporation (PetroChina) and China Petroleum & Chemical Corporation (Sinopec) show the most significant upstream impact as cash flow is dramatically weakened under the current low oil prices and recent under-performance of reserve replacement efforts. The pair saw their 2019 debt levels increase from 2018 along with weakened debt to equity ratios coming into 2020.

“China National Offshore Oil Corporation (CNOOC), the third largest Chinese NOC, is the most sensitive to a low case oil price scenario on post-tax cash flow. The company also has one of the largest international exposures among the peer group with nearly half of the production coming from its overseas assets, which may mean additional exposure to disruptions and uncertainties outside of its home market.” 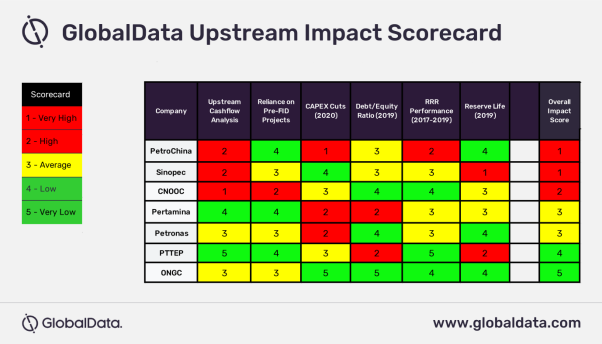 High exploration and production costs in China are undoubtedly driving the companies to take preventive measures by slashing planned investments and cutting operational expenditures. PetroChina has pledged the most drastic cut-off, nearly 32% from its original planned budget for 2020. On the other hand, CNOOC announced an 11% capex-cut focused on expensive overseas projects as the break-evens are higher than domestic developments.

In the respective peer group of Asian NOCs, ONGC is better positioned to cope with the current global market volatility due to its low debt to equity ratio, strong reserve replacement performance and significant reserves life. So far, the company has opted to slightly increase its capex by approximately 2% for FY21 despite the uncertainty, focusing predominantly on growth in its domestic portfolio.

Chai concludes: “Asian NOCs are usually guided by the respective government strategies at a certain level and have significant responsibilities to support their respective countries. NOCs in China are currently focusing on raising domestic output and cutting overseas operations. The Q1 earnings of PetroChina and Sinopec saw quarterly year-on-year revenue decline and operating loss, which is likely to continue and roll over to Q2 2020 due to the challenging market conditions. However, a recovery in the nation’s oil demand has been observed as China is gradually easing its COVID-19 restrictions.”