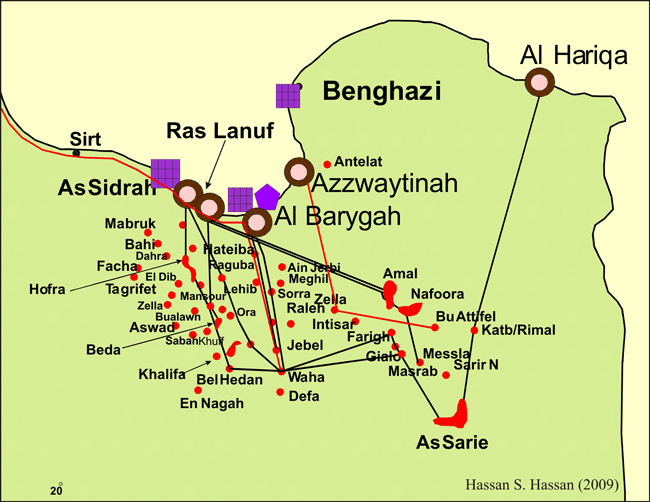 CAIRO — Libya’s oil industry is crumbling after more than nine years of neglected maintenance amid a civil war that’s killed thousands and destroyed towns across the country.

The lack of basic, nuts-and-bolts servicing has left pipelines corroding and storage tanks collapsing. Remedial work at wells alone could cost more than $100 million, the head of the state-run National Oil Corp. told Bloomberg, and that’s money the government can ill afford.

The damage means that Libya, despite having Africa’s largest crude reserves, will struggle to ramp up production quickly even if the conflict abates soon. Fighters are poised now for what could be a decisive battle at Sirte, a city just a two-hour drive from the so-called oil crescent — a cluster of export terminals for most of the nation’s crude.

Libya produces about 90,000 barrels a day. That’s a fraction of the 1.6 million that companies such as Eni SpA and Repsol SA pumped in partnership with the NOC before the ouster of strongman Moammar Al Qaddafi in 2011 and the catastrophic war that followed. Until now, the NOC has usually succeeded in restoring operations quickly after regaining control of oil facilities shut due to fighting. That resilience, however, is fraying.

“The longer we wait, the greater the damage and the higher the cost,” NOC Chairman Mustafa Sanalla said in a written response to questions. “It is a tragedy for the people of Libya that political game-playing has been allowed to cause such damage to our country’s critical national infrastructure.”

The political turmoil has left Libya divided between a United Nations-recognized government in the capital Tripoli, where the NOC has its headquarters, and a competing administration based in the east. Since January, when supporters of the eastern-based commander Khalifa Haftar shut most of the country’s oil fields and ports, daily output has plunged by more than a million barrels.

The Tripoli government of Fayez al-Sarraj, backed by Turkey, appears for now to have the upper hand on the battlefield. Its troops repulsed Haftar’s western offensive and have advanced as far as Sirte, on the central coast, which the rebels still control. When Haftar, who has support from Russia and Egypt, called a cease-fire this month, the government rejected it, saying it would first capture Sirte and an air base called Jufra.

Armed groups forced Libya’s biggest oil field of Sharara to stop production twice this month, and they also closed the nearby El-Feel deposit. Both southwestern fields had only just re-opened after halting in January.

The NOC’s lack of access to Sharara prevented workers from injecting chemicals into a pipeline to stop corrosion. A 16,000-barrel tank that handles overflows, or surges, collapsed last month as a result, Sanalla said.

“We are deeply concerned about corrosion in the pipelines,” he said. “Due to the disruption of exports, crude oil has stayed in the pipelines, which has environmental and other implications that will not be easy to address in the future.”

Harouge Oil Operations, a joint venture between the NOC and Canada’s Suncor Energy Inc., blames corrosion for at least 80 leaks at its facilities from January to May, Sanalla said. Harouge exports crude from Libya’s third-largest oil port at Ras Lanuf.

“Throughout the last nine years, Libyan production has been able to rebound,” said Mohammad Darwazah, an analyst at consultant Medley Global Advisors. “But many fields require urgent maintenance, and damage sustained to storage depots at the eastern terminals has not been fully repaired, limiting how quickly fields can ramp up.”

Prolonged shutdowns have reduced the pressure that wells need to spout oil. On earlier occasions when Sharara re-opened, it took just a few days to restore production to around 300,000 barrels a day. This time, the field will need around three months to recover, according to the NOC.

How to pay for the repairs is an open question; the NOC said Sunday that blockades of fields and ports by Haftar’s supporters have deprived Libya of $6 billion in potential oil revenue since January.

“Sustained under-funding of the state operator and multiyear delays to field and asset maintenance will make the challenge of a resumption greater this time around,” said Bill Farren-Price, a director at consultant RS Energy Group Canada Inc.

Any increase in Libyan supply could jar efforts by the OPEC+ coalition to limit global production. The Organization of Petroleum Exporting Countries and allies such as Russia are seeking to rebalance crude markets and prop up prices after they crashed with the spread of the coronavirus early in the year. Brent crude has more than doubled since late April, but at around $40 a barrel it’s still down 40% this year.

Libya, an OPEC member, is exempt from the output cuts, due to the nation’s strife.

For energy analysts and traders, the rot in Libya’s oil facilities makes it that much tougher to predict when production will pick up.

“Even if a peace deal is reached, its durability and impact on oil production remain uncertain,” analysts at Citigroup Inc., including Francesco Martoccia, said in a note this month. “The NOC is also confronting a steep natural decline rate of roughly 8% per year, which requires capital expenditures to at least marginally offset it.”