OSLO – When Norway’s largest political party decided that the Lofoten Islands in the north should not be opened up to oil exploration, a chill ran down the spine of the energy industry.

The decision by the opposition Labour party last weekend effectively ended any chance of drilling in the foreseeable future in an area of natural beauty that energy executives say is important to the future of the country’s oil production.

It was a stark example of how priorities are changing in a country that has become one of the world’s richest on the back of oil. In particular, young people concerned about climate change are pushing for curbs on exploration, with many thinking the unthinkable: shutting down the oil industry altogether. 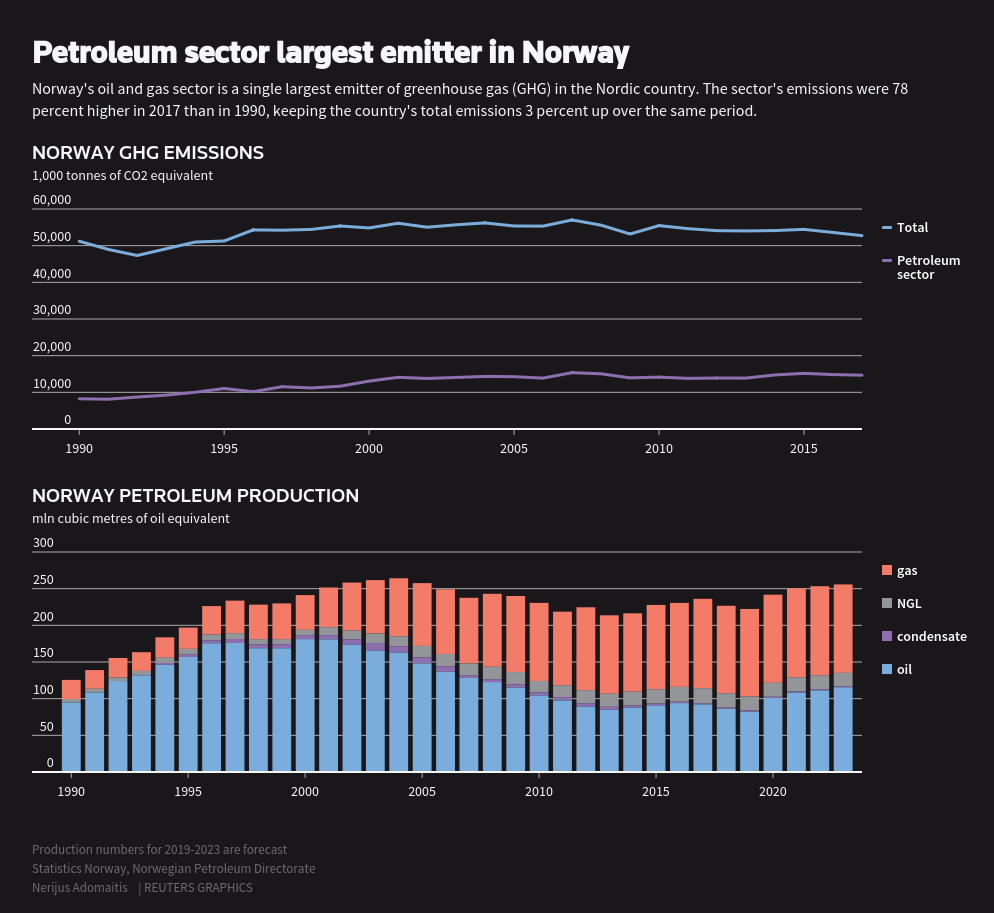 While some might dismiss such protests as youthful rebellion, young people are undeniably driving change.

The decision by Labour, a traditional ally of the oil industry, to withdraw its support for Lofoten drilling was largely down to an internal campaign by its AUF youth wing.

“In this area, nature has to come first,” AUF leader Ina Libak, 29, told Reuters. “Because it’s so vulnerable, and because of fisheries and other kinds of industries.”

Indeed the youth wings of seven out of the nine parliamentary parties in Norway call to either restrict or to completely phase out petroleum activities, according to a Reuters review of the programs of the youth organizations.

The youth wing of the ruling Conservative party does not call for restrictions but says it assumes “market and environment-based” downsizing of the industry. Labour’s AUF wants to phase it out altogether by 2035.

Labour’s Lofoten move, which created a parliamentary majority against drilling, caused consternation in the oil and gas industry. The area is estimated to contain 5 percent of total undiscovered resources on the Norwegian continental shelf and, furthermore, executives fear the green lobby will soon move on to their next target, such as exploration in the Arctic.

Unions highlighted the economic risks of winding down the oil and gas sector – it employs 170,000 people and is the country’s top moneymaker, projected by the government to produce 17 percent of gross domestic product this year.

“Every responsible government, on the left or on the right, will need to balance the budget and they will have to rely on revenues from oil and gas,” said Frode Alfheim, the leader of the top trade union for oil workers, Industri Energi.

“Those revenues are not possible to replace from other sources. Much of the welfare state comes from this industry,” he told Reuters.

STRUGGLE FOR STAFF
Another sign of the hardening opposition towards fossil fuels, particularly young people, and its impact on the energy industry is a lack of qualified recruits to replace a rapidly aging oil and gas workforce.

State oil giant Equinor, the top oil producer in Norway by far, expects about half of its 21,000-strong workforce to retire in the next decade.

Yet the number of applications for petroleum geosciences and engineering program at the Norwegian University of Science and Technology (NTNU) in Trondheim, the country’s leading program, fell to 33 in 2018 from 420 in 2013 – though the 2014-2016 downturn in crude prices could also have been a big driver.

Petroleum studies attract fewer students
Number of applications for petroleum geosciences and engineering program at the Norwegian University of Science and Technology, NTNU, the country’s leading program, fell to 33 in 2018 from 420 in 2013

“It will be hard for us to provide enough for the oil companies in the next five years,” Egil Tjaaland, head of the Department of Geoscience and Petroleum at NTNU told Reuters.

“Is this a response to the price of oil or is it because of environmental reasons or political reasons? Young people today are looking for a secure job in and a job with a future – as it has always been,” he added.

But those calling for Norway – western Europe’s largest oil producer and Europe’s second-largest gas supplier after Russia – to wean itself off oil and gas say the future of jobs in the country is a big factor motivating their campaign.

“The worst thing that we can do for people working in oil and gas industry is to close our eyes to what’s happening abroad and just say ‘good luck with this’,” Libak said.

“When Europe stops using oil and gas and switches to other energy sources, and that is happening very fast, it would affect us … I’m really concerned that we will have high unemployment in 20 years if we don’t make that plan now.”

WHEN, NOT IF
Ada Johanna Arnstad, leader of the youth wing of the agrarian Centre Party, questioned how Norway could maintain high oil and gas output if countries met their carbon emissions reduction goals under the Paris climate accord, leading to falling demand for fossil fuels.

“Right now we (Norway) are planning for the Paris agreement to come true. If it does, we will have huge issues in Norway if we continue to bet that oil and gas production will last for another 50 years,” the 26-year-old said.

Her family is well-versed in the energy sector; her aunt, Marit Arnstad, is a former oil minister and an ex-member of the board of Equinor.

“Let’s face it, the increased pressure and higher expectations (on oil companies) are not only coming from narrow political groupings, and activists, as they used to,” Equinor CEO Eldar Saetre told oil executives in Houston last month.

“But increasingly also from broader political circles, from more and more investors, and not least from young people.”

From being a poor country characterized by emigration and living off fishing and agriculture, Norway became prosperous after oil was discovered at Ekofisk in the North Sea in 1969.

It now enjoys a GDP per capita roughly twice the level of Britain’s, according to 2018 International Monetary Fund data, and prudently pooled its revenues from oil into a sovereign wealth fund, now $1 trillion in size and the world’s largest.

However, in a sign of the times, the giant wealth fund is itself now reducing its investments in oil and gas explorers to reduce its exposure to a risk of a permanent decline in oil prices.

For the country’s central bank, which manages the fund that owns about 1.4 percent of all equities worldwide, it’s not a matter of whether the oil industry will disappear, but when.

“We have always known that oil and gas activities will be phased out sooner or later,” Central bank Governor Oeystein Olsen told a meeting of Norway’s political and business elite in February.

“A stricter global climate policy may mean that this will occur sooner than foreseen earlier,” he said, though cautioned against actively forcing a downsizing of the industry.