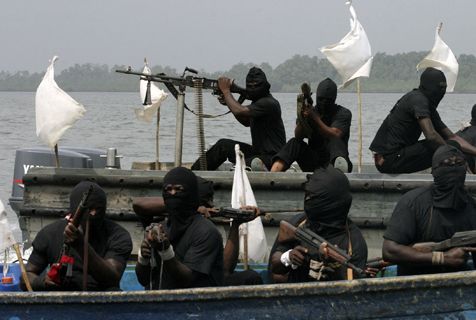 Port Harcourt — Coastal communities in the Niger Delta region have sent a save-our-soul message to the Niger Delta Development Commission, over the continuous attacks and kidnapping by sea pirates, who operate along the Atlantic coast and creeks.

Local Government Chairmen of Niger Delta Coastal Communities, during a courtesy visit to NDDC, solicited the assistance of the Commission in the procurement of security boats and engines for fishermen in the coastal communities of the region.

Chairman of the group, Chief Williams Mkpah, lamented that for many years, fishermen and commercial activities in the coastal communities of the Niger Delta region had suffered several attacks from sea pirates who operate along the Atlantic coast and creeks.

Mkpah who is the Chairman of Ibeno Local Government Area in Akwa Ibom State, said that the attacks, which started many years ago, assumed an alarming rate in the last few years, especially in 2020 with the coming of the COVID-19 pandemic lockdown.

He expressed optimism that the provision of these facilities would go a long way to secure the water ways and bring back commercial activities in the coastal areas for the benefit of the people.

“The sea pirates moved further to include kidnapping of fishermen to their atrocities. In all these, there has been very little or no government intervention to curb the menace.

“The fishermen have decided to apply self-help to redeem their situation at a great cost to them, but it is becoming increasingly difficult for the fishermen to cope with the financial costs.”

Meanwhile, the Interim Administrator of NDDC, Mr. Effiong Akwa, has pledged to assist local governments to beef up security in the coastal communities of the Niger Delta region.

He advised the local government chairmen to ensure a proper and effective use of the high speed boats when they become available, promising that the assistance to the coastal communities would be done in phases.

The NDDC boss said that there may be need for the re-introduction of marine police and also involve the amphibious unit of the Nigerian Army, noting that if the poor security situation was allowed to deteriorate further, it would adversely affect the fish farmers.

He charged the Council Chairman to be prepared to share security information with security agencies in the region, stating that the Niger Delta was critical to the economic wellbeing of the country and thus its security must be taken as priority.