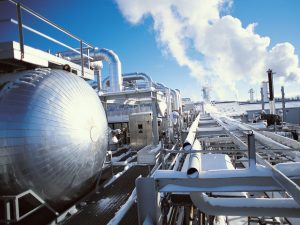 London — U.S. natural gas stocks have surged during the injection season and are now above the five-year seasonal average for the first time in two years, despite a slump in prices and a sharp drop in the number of rigs drilling for gas.

Working stocks in underground storage have risen by 2,465 billion cubic feet (bcf) since the start of April, the largest seasonal gain since 2014, according to data from the U.S. Energy Information Administration (EIA).

Stocks have moved above the five-year average this month for the first time since September 2017 and are now 519 bcf (17%) above the same point last year (“Weekly natural gas storage report”, EIA, Oct. 24).

In response, prices have slumped in a bid to encourage power producers to buy as much gas as possible and run their gas-fired generation units for more hours at the expense of coal-fired power stations.

Futures prices for gas delivered to Henry Hub during calendar year 2020 have fallen to less than $2.50 per million British thermal units, down from almost $2.70 at the same point last year and nearly $2.90 two years ago.

Domestic gas production has soared faster than either consumption by domestic power producers or the ability of the export market to absorb it.

Gas production rose by 10.5% in the three months between May and July compared with the same period a year earlier, only a modest slowdown from a record growth rate of 13.7% in August-October 2018.

By contrast, gas consumption by power producers was up by just 1.1% in the three months between May and July from a year earlier, an abrupt deceleration from growth of 18.5% in August-October 2018.

Net gas exports continued to accelerate and were up by 342 billion cubic feet between May and July compared with a year earlier.

But even the massive rise in exports was not sufficient to prevent a near-record increase in gas stocks during the injection season.

The broad-based slowdown in manufacturing as a result of the trade war with China curbed both gas and power consumption growth compared with 2018 and 2017.

But gas stocks have been rising faster for any given level of cooling demand for two years now, highlighting the underlying change in gas market dynamics.

Stock builds in 2019 were higher than in 2018 for the same number of cooling degree days – continuing a shift dating back to 2017.

The domestic generation market is increasingly saturated and there are infrastructure limits on how quickly exports can rise, so the rebalancing of the market will have to come from a slowdown in production growth.

The number of rigs drilling for gas has already fallen by a third since January, according to oilfield services company Baker Hughes.

Reduced drilling rates should progressively cut production growth towards the end of 2019 and into 2020 and eventually limit oversupply.

In the meantime, however, many hedge funds have become very bearish about the outlook even though gas prices are trading not far above multi-year lows.

Hedge funds and other money managers had amassed a net short position in NYMEX and ICE futures and options equivalent to 1,799 bcf by Oct. 22, close to the largest on record.

Portfolio managers were running more than two bearish short positions for every bullish long position, among the most bearish in a time series going back to 2010.

But most are betting that over-production is so high and stocks are so plentiful the market will ride through any short-term cold spell.

Only a further slowdown in domestic gas production growth will help balance the market and that is unlikely to materialise until 2020.