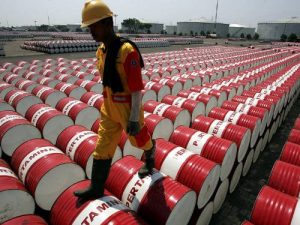 Total stocks of crude and refined products outside the strategic petroleum reserve fell by 10 million barrels last week and are now down by 188 million barrels compared with the same point a year ago.

Total stocks have fallen in 38 out of the last 52 weeks as OPEC+ and U.S. shale firms limit crude production even as product consumption recovers.

Inventories are 12 million barrels or 1% below the pre-pandemic five-year average for 2015-2019, according to data from the U.S. Energy Information Administration.

The crude shortage has become especially acute around the delivery point for the NYMEX WTI contract at Cushing, Oklahoma, where crude stocks are 21% below the five-year average for 2016-2020.

The shortfall has pushed the WTI contract into a steep backwardation, with front-month futures trading at a premium of almost $2.90 to the fourth delivery month, which is in the 7th percentile for all weeks since 2012.

On the refined products side, the volume of gasoline supplied to the domestic market hit a record 10.0 million barrels per day (bpd) last week, surging from 9.2 million bpd the previous week.

But gasoline supplied measures transfers from the primary petroleum system (refineries, import terminals, pipelines and tank farms) into the secondary system (wholesalers and retailers) rather than actual consumption by motorists.

Last week’s fuel deliveries were likely distorted by the impending July 4 public holiday, with suppliers pre-positioning stocks and to give tanker drivers a rest day, so they will probably reverse this week.

The one-week jump in gasoline supplied, more than 9%, was among the largest over the last three decades, and similar to the jump recorded after Memorial Day, which strongly implies it was a calendar effect.

Nonetheless, the volumes of gasoline supplied are trending gently upwards as businesses re-open, commuting resumes, and leisure travel returns in the wake of the pandemic’s first and second waves.

The volume of gasoline supplied over the last four weeks has been less than 4% below the pre-pandemic five-year average, suggesting the economy and driving patterns have healed more rapidly than seemed likely last year.