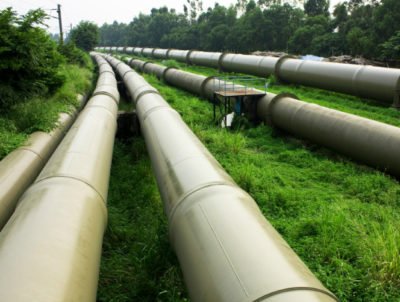 23 June 2018, Sweetcrude, Port Harcourt — The Bayelsa State Government has called on the Shell Petroleum Development Company, SPDC, to conduct integrity test on its pipelines in the Niger Delta region, following the frequency of oil spillages from its operations.

Bayelsa State Deputy Governor, Rear Admiral John Jonah (Rtd) who gave the charge, pointed out that a good number of Shell’s pipelines were laid a long time ago and may have suffered from corrosion.

Jonah speaking while inspecting the SPDC Trans-Ramos pipeline spills which affected Aghoro Community in Ekeremor Local Government Area of the state recently berated Shell for the delay in carrying out remediation activities and provision of relief materials to mitigate the sufferings in the affected communities.

Meanwhile, the Shell Petroleum Development Company of Nigeria, SPDC, said over 90percent of spills from its facilities are usually a result of sabotage from third-party interference.

SPDC Media Relations Manager, Mr. Bamidele Odugbesan, explained that integrity test is carried out regularly on its pipelines, and sectional replacement of pipelines are made where necessary.

Odugbesan added that it was in the course of such pipeline replacement work, based on its integrity test on the Trans Niger Pipeline, that the people of Ogoni accused the company of laying pipelines to resume oil exploration in Ogoniland.

He also confirmed that relief materials have been sent to the communities affected by the Trans-Ramos oil spills.

According to him, “Are you aware that over 90percent of those spills are usually from a third party interference on our facility? We are the first IOC in this country with a dedicated website where our spills report is published.

“In addition to that, we don’t have to wait for the Bayelsa State Government to tell us to conduct integrity test on our facility, we do that as a matter of business responsibility from time to time.

“And that is why we also do sectional replacement of pipeline, when we conduct our test and see that anything is wrong, we do pipeline replacement.

“It was in the course of such pipeline replacement in Ogoni that MOSOP came to accuse us of laying pipelines to resume oil exploration in Ogoni, which we explained that we are conducting integrity check on our pipelines and where something is wrong we replace the pipeline.”

It will be recalled that two oil spillages from SPDC facilities have been recorded in the last two months, with the first one occurring on April 23, 2018 at Odimodi community in Delta State, which extended to Bayelsa and the second one on May 18, 2018, at Aghoro community, all on the SPDC Trans-Ramos pipeline.