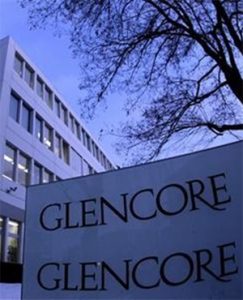 01 December 2018, News Wires — The authorities in Democratic Republic of Congo will audit the supply chain for Glencore’s Kamoto project next week to determine where small amounts of uranium detected in its cobalt come from, the mines minister said on Thursday.

Glencore subsidiary Katanga Mining said on Nov. 6 it had halted cobalt exports from Kamoto in southeastern Congo while it builds a facility to remove excess uranium. It said the facility should be completed by mid-2019.

Mines Minister Martin Kabwelulu suggested on Wednesday that Glencore had suspended exports and announced its investment in the $25 million facility to avoid higher taxes that would kick in once operations from Kamoto Copper Co (KCC) were profitable.

Glencore’s relations with Congolese authorities have grown increasingly strained in recent months as the government pushes for foreign investors to contribute more to state coffers.

“In 2015, when KCC was close to the reimbursement of its investment, it claimed it needed to reinvest to install new machines,” Kabwelulu told reporters. “Now KCC has just said it’s unilaterally stopping sales of cobalt. Is that normal?”

In a text message to Reuters on Thursday, he added: “I am only going to do an audit next week on the supply chain to know where the excessive traces of uranium come from in their product!”

Kabawelulu did not elaborate on the audit. A Glencore spokesman declined to comment. The company has previously denied that it undertakes investments to avoid paying profit taxes.

Katanga said in its statement this month that the levels of radioactivity detected do not present health and safety risks but it would stockpile the cobalt until the new facility was in place to remove the uranium.

The development is the latest setback to hit Glencore’s Congo operations this year.

The company received a subpoena from the U.S. Department of Justice in July requesting documents for its Congo business related to compliance with the U.S. Foreign Corrupt Practices Act and money laundering statutes.

It also had to make hefty payouts to Congolese state miner, Gecamines, and its former joint venture partner, Israeli billionaire Dan Gertler, to settle legal cases against it.

Glencore has also seen taxes hiked under a new mining code signed into law in March.