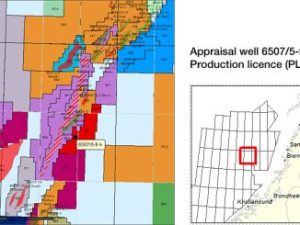 London — The Norwegian Petroleum Directorate (NPD) has announced a minor gas discovery southwest of the Skarv field in the Norwegian Sea at wildcat well 6507/4-3 S.

Preliminary estimates indicate the size of the discovery, which is operated by ConocoPhillips Skandinavia AS, is less than 0.1 million standard cubic meters of recoverable oil equivalent, the NPD revealed, adding that the result from the well will be considered by the licensees for further prospectivity in the license. The well was not formation-tested, but extensive data acquisition and sampling were carried out, the NPD highlighted.

Well 6507/4-3 S was drilled to a vertical depth of 3,914 meters below sea level and was terminated in the Lange Formation from the Late Cretaceous, the NPD outlined. Water depth at the site is said to be 436 meters.

On June 15, the NPD announced a dry well near the Ormen Lange field in the Norwegian Sea via the wildcat well 6305/5-C-3 H. The objective of the well was to prove petroleum in reservoir rocks in the Lange Formation and the Lysing Formation in the Upper Cretaceous, according to the NPD, which said the well encountered mainly siltstone with thin layers of sandstone and dolomite stringers in both formations.

On June 9, the NPD announced another minor oil and gas discovery near the Johan Castberg field in the Barents Sea through well 7220/8-3. Preliminary estimates placed the size of the discovery between 0.8 and 1.6 million standard cubic meters of recoverable oil equivalent, the NPD revealed. The well is operated by Equinor Energy AS.

On June 1, the NPD announced a separate minor oil and gas discovery near the Valhall field in the North Sea via well 2/8-19, which is operated by Aker BP ASA. Preliminary estimates placed the size of the discovery between 0.6 and 1.9 million standard cubic meters of recoverable oil equivalent, the NPD highlighted.

“Of course, it is impossible to say exactly how much is yet to be discovered, but our analyses indicate that it can be 24 percent of the total,” NPD Director General Ingrid Sølvberg says in a statement posted on the NPD’s website.

“Therefore, it is important to explore in all the sea areas”, the director general adds in the statement.