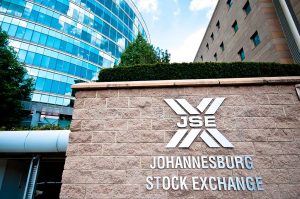 The Johannesburg Stock Exchange (JSE) building in Sandton. It has operated as a market place for the trading of financial products for nearly 125 years.

Petrochemicals firm Sasol, which suffered its worst trading day yet, was the biggest loser on the Johannesburg Stock
Exchange. Its shares closed 29.36% lower at 37.24 rand, bringing losses this week to 80%.

Trump imposed sweeping restrictions on travel from Europe on Thursday to restrict the spread of the coronavirus after the World Health Organization classified the outbreak as a pandemic.

All markets fell in response to the news and oil prices, already reeling from the threat of a flood of supply, fell again on Thursday.

The oil price slide helped to wipe 79 billion Rand ($4.8 billion) off the market value of Sasol.

The company, which has operations in the United States, said on Thursday it would consider an equity issue and expand asset disposals in excess of the current target because of concerns around its debt.

“It’s a double black swan. You’ve got this coronavirus and then you’ve got the collapse in oil prices. Now Trump last night put a travel ban from Europe, which will affect the airlines. So it seems to be one bit of bad news after the other and there’s no end in sight,” Cratos capital equities trader Greg Davies said.

“Airline industries are going to suffer because of no flights (going into the U.S.) and those airlines use huge amounts of fuel for their planes so demand for fuel is going to drop and that puts more pressure on the oil price.”