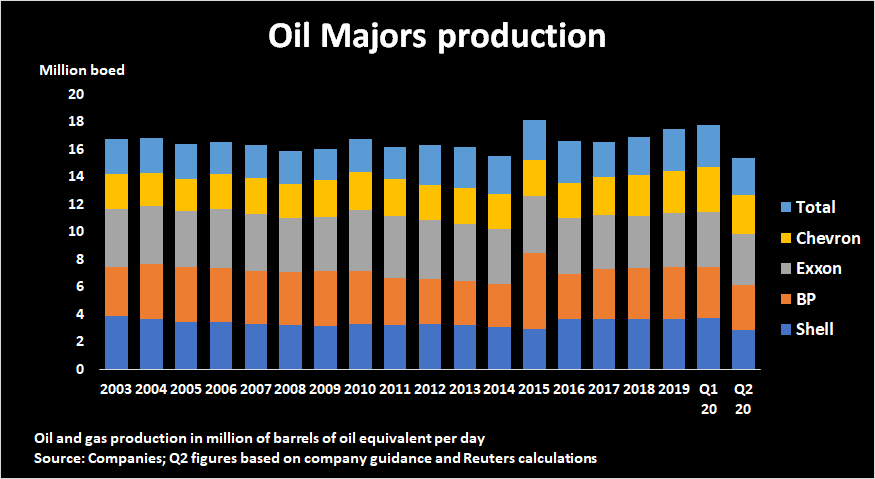 LONDON — Oil and gas output from some of the world’s top oil companies is set to drop by nearly 11% in the second quarter of 2020 to levels not seen in at least 17 years, according to Reuters calculations.

The output cuts are driven by an unprecedented drop in oil consumption due to coronavirus-related movement restrictions that have led to a surge in supplies and a collapse in crude prices to levels not seen in more than two decades.

Five of the top publicly-traded oil and gas producers, known as oil majors, have in recent weeks outlined plans to sharply reduce production from Iraq to the shale basins in the United States.

The cumulative output for Exxon Mobil, Chevron, Royal Dutch Shell, BP and Total will drop to the lowest since at least 2003, based on Refinitiv data.

“Our output will be down in the second quarter, and it is very uncertain how the rest of year will unfold,” BP (BP.L) Chief Executive Officer Bernard Looney told Reuters last week.

It is also cutting in other countries, including in OPEC nations and other major producers including Russia and Azerbaijan that agreed in March to cut output by an unprecedented 23%, Looney said.

Shell Chief Financial Officer Jessica Uhl said that in some cases the production cuts are due to logistical problems such as lack of storage.

Exxon and Chevron are slamming the brakes on oil output, with plans for combined global shut-ins of 800,000 barrels per day in response to plunging crude prices.

Total said on Tuesday its production will be at least 5% lower on average in 2020 at 2.95 to 3 million boed, driven by voluntary reductions in Canada and the OPEC+ quotas.

Following is a table of planned production reductions in the second quarter of 2020, based on company guidance and Reuters calculations (in millions of boed)