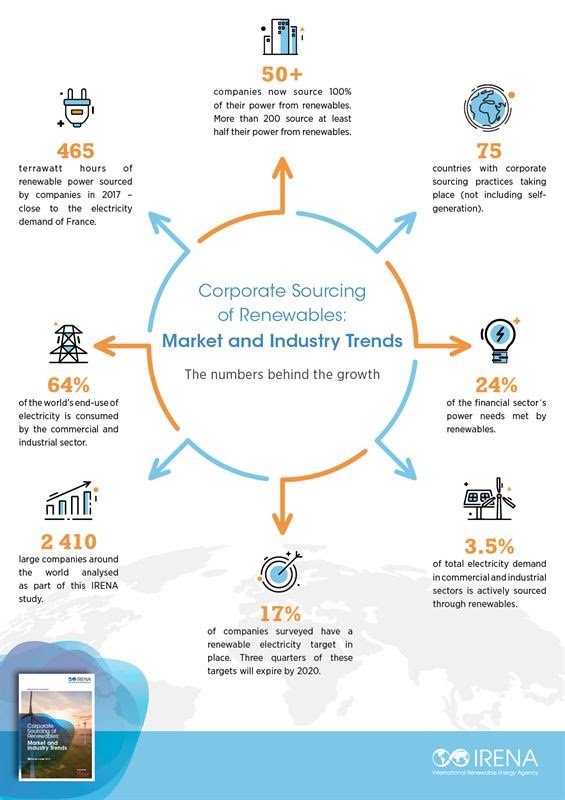 27 May 2018, Sweetcrude, Copenhagen, Denmark – Companies in 75 countries actively sourced 465 terawatt hours (TWh) of renewable energy in 2017, an amount close to the overall electricity demand of France, according to a new report from the International Renewable Energy Agency (IRENA).

With the continued decline in the costs of renewables, the report suggests, corporate demand will continue to increase as companies seek to reduce electricity bills, hedge against future price spikes and address sustainability concerns.

Corporate Sourcing of Renewables: Market and Industry Trends, the first global assessment of trends and policies incorporate sourcing of renewables, shows that renewable energy sourcing by private sector companies, made possible with the right policy framework in place, can be a key factor in the world’s pursuit of a sustainable energy transformation in line with the objectives set out in the Paris Agreement.

According to the report, environmental and sustainability concerns, social responsibility and reputation management and economic and financial objectives are the three primary drivers of corporate sourcing.

The findings of the report, presented today at the Ninth Clean Energy Ministerial in Copenhagen, show that half of the over 2,400 large companies analysed are voluntarily and actively procuring or investing in self-generation of renewable electricity for their operations. Of the companies in the study, more than 200 sources at least half of their power from renewables. Electricity self-generation is the most common sourcing model, followed by unbundled energy attribute certificates (EACs) and power purchase agreements (PPAs).

“Corporations are responsible for around two-thirds of the world’s total final electricity demand, making them central to, and key actors in, the energy transformation,” continued Mr. Amin. “As governments all over the world recognise this vast potential, the development of policies that foster and encourage corporate sourcing in the electricity sector and beyond will inject additional needed investment in renewable energy.”

The report finds that the corporate sourcing trend is widespread and dynamic, with companies participating in the practice coming from various sectors. By volume, the majority of renewable electricity was consumed in the materials sector while the highest shares of renewable electricity consumption are found in the financial (24 percent) and information technology (12 percent ) sectors. Countries in Europe and North America continue to account for the bulk of corporate sourcing.

Of the companies analysed in the report, only 17 percent have a renewable electricity target in place. Three-quarters of those targets will expire before 2020, representing a significant opportunity for corporates to develop new medium to long-term renewable energy strategies and targets that factor in improvements in renewable energy technology and cost declines

The report is a contribution to the Clean Energy Ministerial “Corporate Sourcing of Renewables” campaign, co-led by China, Denmark and Germany and co-ordinated by IRENA.