Corruption: Diezani’s lawyer blocked EFCC from interrogating her in UK 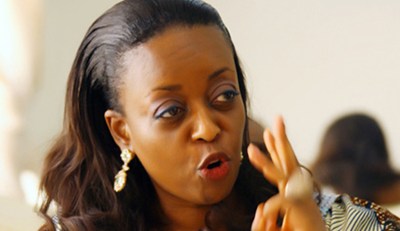 Oscarline Onwuemenyi, with agency reports
26 September 2017, Sweetcrude, Abuja – The Economic and Financial Crimes Commission (EFCC) has claimed its investigative team has been blocked from meeting with the immediate past Minister of Petroleum Resources, Mrs. Diezani Alison-Madueke, in the United Kingdom.

The former minister has been staying in the UK since 2015 when investigation into her tenure began.

But EFCC stated that its efforts to interrogate her over the allegations had been abortive as her lawyer, John Binns of BCL Solicitors, refused to allow the commission’s team of investigators, led by Mr. Abdulrasheed Bawa, to meet with her in the UK earlier in March this year.

A detective with the commission, Mr. Rufai Zaki, who deposed to the EFCC’s counter-affidavit, added that it was not yet possible to bring the former minister back to Nigeria as she was being investigated by the UK’s Metropolitan Police for several other financial crimes, saying the probe had reached an advanced stage.

In one of the nine counts, the anti-graft agency alleged that Alison-Madueke and other officials aided and abetted Omokore in committing money laundering offences in relation to the diversion of the crude oil money.

Zaki, the deponent to the EFCC’s counter-affidavit, stated that Alison-Madueke had absconded to the UK after leaving office in 2015 upon realising that the EFCC had commenced investigation into her activities.

He stated in the counter-affidavit, “That sometime in 2015, the commission received an intelligence report bordering on abuse of office, criminal breach of trust, stealing, conversion and receiving stolen properties.

“That the commission further assessed the intelligence report and found that there was merit in same. Investigation was conducted in respect of this case before a charge was preferred against the defendants (Omokore and others).

“That at the tail end of the tenure of the applicant as Minister of Petroleum Resources, the commission received a lot of complaints and intelligence reports against the applicant, alleging that she was involved in various corrupt practices, money laundering, stealing of public funds and illegal acquisition of properties within and outside Nigeria.

“That immediately the applicant (Alison-Madueke) got to know that investigations had commenced in respect of her various nefarious illegal financial activities while she was the Minister of Petroleum Resources, she absconded from Nigeria in order to escape the investigation and prosecution by the Economic and Financial Crimes Commission.

“That upon realising that the applicant is in the United Kingdom, we made efforts to schedule a meeting with the applicant in order to interview her in respect of her involvement in the activities leading to this charge and many other alleged financial crimes linked to her but up till now, she had always avoided having any meeting with members of our team.

“That the applicant’s lawyer in the United Kingdom, one John Binns of BCL Solicitors, informed the members of the team of investigators headed by Abdulrasheed Bawa, when they visited the United Kingdom in March, 2017, that the team would not be permitted to meet the applicant for any interview in view of the fact that she is not within the territory of the Federal Republic of Nigeria.

The six, named as defendants in the case in which Alison-Madueke had sought to be joined as a defendant, include Omokore; his two companies, Atlantic Energy Brass Development Limited and Atlantic Energy Drilling Concepts Limited.