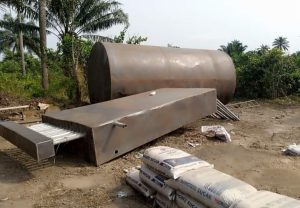 *Section of a newly-built illegal refinery in Rivers State

Port Harcourt  — The Chairman of Ogba/Egbema/Ndoni Local Government Area of Rivers State, Hon Vincent Job, has declared war on activities of illegal oil bunkering and refining.
This he said was in line with the directive by Governor Nyesom Wike to the 23 local government chairmen, traditional rulers and security agencies  in the state to stamped out illegal oil bunkering and refining activities in the state, which has been a major cause of black soot.
Speaking at a stakeholders’ meeting on illegal bunkering and artisanal oil refining in Omoku, Job lamented that the life expectancy of an average Rivers man has been reduced due to prolonged exposure to soot.
He lamented that oil theft remains a threat to the nation’s economy, while residue from illegal refineries damages the soil such that no green vegetation grow in an affected place for years if there is no clean up.
“If the activities of these vandals and illegal operators continue unabated, the socio-economic lives of our people as well as the environment will seriously be affected.
“I therefore enjoin all Traditional Rulers, Chairmen of Community Development Committees, youth bodies and other stakeholders to brace up to the challenge of this menace by co-operating with the taskforce already constituted by the Council to identify and report any such illegal
refining site in your domain for further action.
“We have already unraveled some notorious areas for which actions avebeen taken.
“ONELGA hosts major oil and gas exploration and production compaties from where the Federal Government draws its revenue. It will not make any economic sense seeing that we will use our hands to destroy the environment,” he said.
Also speaking, the Divisional Officer of NSCDC in ONELGA, Eze Victory, accused political elites of interfering in the fight against oil theft, by consistently calling for the released of bunkering suspects when arrested.
“When we arrest suspects, it’s still the politicians and elites who are always calling us for the released of these arrested suspects.  Political elites should stop calling our bosses and interfering; they will say he is my boy please release him.
“Oil companies should respect MoUs with host communities. If they keep to what they promised the communities, I don’t think youths will go to break their pipelines. They should empower the youths too, because an idle mind is the devil’s workshop,” he said.
Also, the member representing ONELGA Constituency I in the Rivers State House of Assembly, Christian Ahiakwo, accused oil company workers of complicity in oil theft and illegal oil bunkering.
Also, the Commissioner for Youths Affairs, Prince Ohia, who described money made from illegal oil bunkering as blood money, urged security operatives to live up to their mandate.
He said: “Law enforcement agents should live up to their responsibilities. The money you want to make from illegal oil bunkering is blood money because people are dying Every day from asthma, bronchitis and other respiratory ailments caused by soot.”
Meanwhile, the Nze Obi of Egbema, His Majesty, King Evaristus Amuda, blamed the rising cases of illegal oil bunkering activities in the area on the connivance of personnel of the Nigerian Security and Civil Defence Corp, NSCDC.
“Oil bunkering became pronounced in our community with the establishment of Civil Defence in ONELGA. It is time to question them, will they allow us to fight the bunkering? The oil company workers are also involved,” he stated.