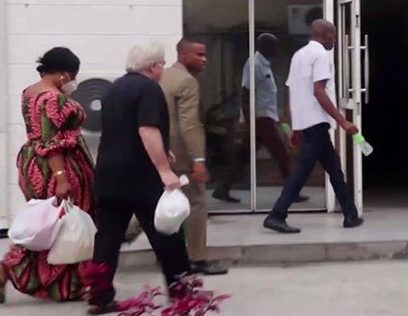 *Peiter Borremans and Nkechi Borremans being escorted into custody

Port Harcourt — There was mild drama as the Federal High Court in Port Harcourt on Thursday, remanded to prison custody, a Dutch national, Peiter Borremans and his wife, Nkechi Borremans, for fraudulent dealings involving a marine oil vessel to the tune of $330,000,

They were arraigned on two count charges bordering on conspiracy and obtaining by false pretences contrary to Section 1(1) (a) and (2) of the Advance Fee Fraud and Other Fraud Related Offences Act 2006 and punishable under Section 1(3) of the same Act.

Trouble started for the Dutch couple when a petitioner, Jackkyson Multi Services Limited and Alot General services Limited, offered to purchase a marine tanker vessel from Lagon Trade Limited (belonging to Peiter Borremans and Nkechi Borremans) for $1,100,000 and made a part payment of $330,000.

The defendants allegedly vanished into thin air, since 2014, after collecting the money and all efforts to get a refund or delivery of the vessel proved abortive.

The trial Judge, E. A. Obile, had on the first of hearing, two weeks ago, ordered that the susupects be remanded in EFCC custody pending the outcome of their bail application next adjourned date, March 18, 2021.

However, mild drama ensued at the resumed hearing on Thursday which stalled hearing on the motion for bail and possible release of the defendants, who have already spent two weeks in EFCC custody.

Counsel to the defendants, A. C. Okwanya, who had filed the bail application was absent in court, while his representative, D. N. Eziokwu, who announced appearance on his behalf, withdrew the bail application he had earlier filed before the court, signaling his withdrawal from the matter.

Meanwhile another Counsel, H. E Chukwu, who also announced appearance as the defense counsel, said he was the actual lawyer to the Dutch couple, who was contacted and briefed to represent them in the matter.

When the matter was called on Thursday, the prosecutor, Friday Amamaa announced his appearance, Okwanya’s representative also announced appearance for all the defendants including the companies, to the utter confusion and shock of Chukwu (the acclaimed authentic Counsel).

But the trial Judge, E A Bike, took the appearance of the two counsels for the defendants, while urging Chukwu to explain himself.

Chukwu on his part, narrated that he asked Okwanya to help him on the case and file the bail application on the first hearing, since it was impossible for him to make it to the court from his Calabar, Cross River State residence that day.

But Chukwu urged the court to grant him the opportunity for oral bail application, considering that the defendants have been in custody for more than two weeks; however, the Judge maintained that he would not grant oral application in such a criminal charge.

Justice Obile therefore granted Eziokwu leave to make her application and withdrew the bail application, leaving Chukwu and his clients stranded in court.

The judge later adjourned the matter to March 31, 2021 for hearing on the bail application, and ordered that the couple be transferred to Port Harcourt Correctional Centre, till the next hearing date.