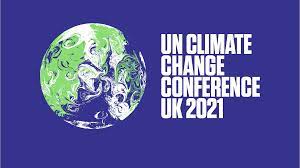 Lagos — The main event at COP26 on Thursday 4th November 2021 focuses on ‘Energy: Accelerating the Global Transition to Clean Energy’. During this time the policy proposals on the agenda will examine the transition away from coal power and the scaling up of clean power.

UK based green-tech company, Clean Planet Energy, who construct ecoPlants that remove non-recyclable waste-plastics from the environment and convert it into ultra-clean fossil-fuel replacements, have today revealed that the United Nations COP26 Climate Change publication features Clean Planet Energy on its front cover, and includes a 4-page article about the UK firm.

Twenty thousand (20,000) copies will be distributed at the main Scottish Event Campus (SEC) and to all Ministers of Environment, MPs, MEPs and Senators of the G20 member countries. Additionally, copies can be found in transport entry points, and will be sent to Government departments of Commonwealth countries.

‘The New Economy’ publication includes introductions by the United Nations, and also Alok Sharma, the President of COP26 and Minister of State at the Cabinet Office.

COP26 is the 26th climate change ‘Conference of the Parties’, and this year is hosted by the UK in partnership with Italy. The ‘Parties’ are the governments which have signed the UN Framework Convention of Climate Change (UNFCCC). The COP brings these signatory governments together once a year to discuss how to jointly address climate change. These conference are where the Kyoto Protocol (COP3) and Paris Agreement (COP21) were signed. The conferences are attended by world leaders, ministers, and negotiators but also by representatives from civil society, businesses, international organizations, and the media.

The 4-page feature details Clean Planet Energy’s solution to the plastic-pollution and climate crises. It also focuses on the significant growth the UK renewables company is experiencing, developing new ecoPlants across the world. Clean Planet Energy’s ecoPlants have the capacity to remove 20,000 tonnes of waste-plastics from the environment every year, and recycle them into ultra-clean fuels and circular-naphtha. The ultra-clean fuels can reduce CO2e emissions by 75%+ compared to fossil fuels.

Whilst the publication can be picked up by delegates and visitors to the main venue (Scottish Event Campus) and side events, 10,000 copies will also be sent to:

The publication is being distributed by Gold Key Media, the world’s largest distributors of newsagents, newsstands, and conference publications. It is expected the total readership will surpass 120,000.