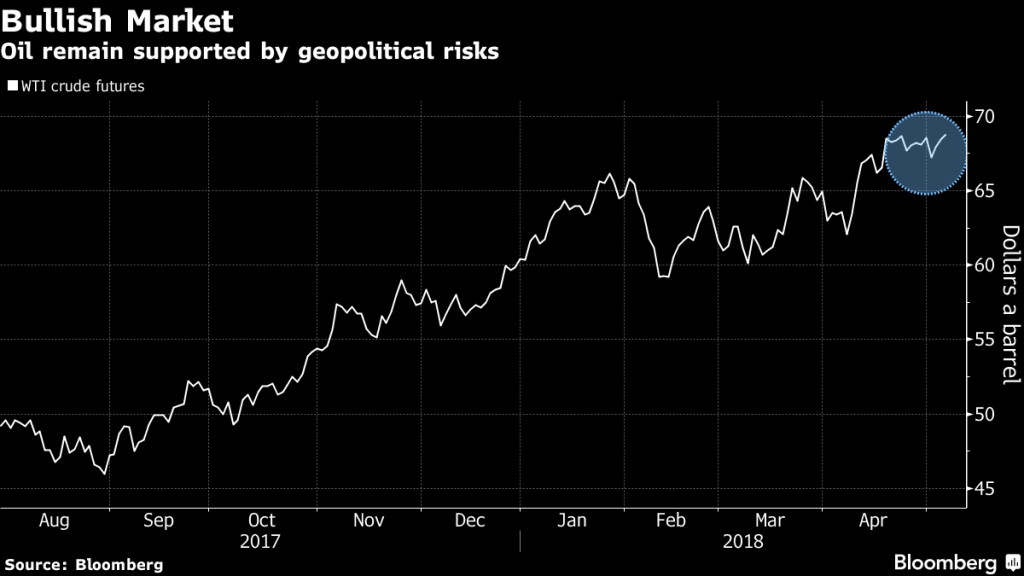 *U.S. benchmark crude has climbed 15 percent so far this year
*Sanctions on Iran may lead to disruption of oil exports

Prices jumped 1.9 percent on Friday to close at the highest level since November 2014. Even though U.S. President Donald Trump has yet to announce whether he’ll pull out of the 2015 Iranian nuclear deal as a May 12 deadline nears, American officials already are positioning for post-accord negotiations. New sanctions could disrupt crude exports from OPEC’s third-largest producer. A rally in equities also pulled oil higher.

“It’s a psychological level,” said Michael Wittner, the head of commodities research at Societe Generale SA in New York. “Geopolitics has been a very key driver in the market and it’s continuing.”

Crude has rallied about 15 percent so far this year as OPEC and allied producers crimp a global glut and geopolitical risks multiplied in the Mideast region that’s home to almost half the world’s oil.

“The market might be weighing the possibility of Trump not extending, which doesn’t change supply-demand balances by itself,” said Michael Loewen, a commodities strategist at Scotiabank in Toronto. “But if new sanctions are created and the U.S. pressures EU nations to follow suit, then the market could be looking much different in a few short months.”

West Texas Intermediate crude for June delivery advanced $1.29 to settle at $69.72 a barrel on the New York Mercantile Exchange, after trading just 3 cents below the $70 mark. Total volume traded was about 1 percent below the 100-day average. Prices are up 2.4 percent this week.

Brent crude for July settlement climbed $1.25 to end the session at $74.87 on the London-based ICE Futures Europe exchange. The global benchmark crude was at a $5.29 premium to July WTI.

“It’s back to what’s been haunting the market and is going to continue as we move a day closer to May 12,” said John Kilduff, a partner at Again Capital LLC, a New York-based hedge fund. “The geopolitical jitters are just infecting the market.”

In the U.S., record crude production has been a headwind on the price rally. A dearth of pipeline capacity in the biggest American oil field — Permian Basin of West Texas and New Mexico — has crushed local prices: some grades of West Texas crude are selling for almost $14 a barrel less than the U.S. benchmark, the steepest discount since July 2014.