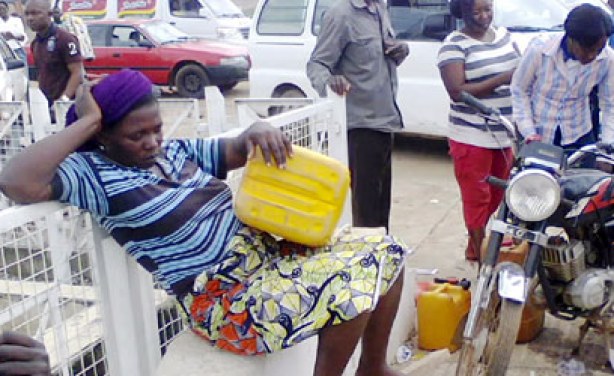 *An exhausted lady takes a nap while waiting to buy kerosene.

Port Harcourt — Another round of fuel scarcity is likely to hit the country any moment from now, except the pump price of PMS is increased to about N200 per litre, or payment of subsidy is reintroduced by the Federal Government.

Already, the landing cost of PMS is N180 per litre, as a result of the increasing rise in crude oil prices, coupled with the continuous plunge in the value of Naira in exchange to foreign currencies.

Speaking on the development, the Independent Petroleum Marketers Association of Nigeria, IPMAN, said importers were no longer importing refined petroleum products into the country due to scarcity of foreign currency.

Chairman of IPMAN in Rivers State, Dr. Joseph Obele, said marketers are finding it difficult to get PMS at the moment, as depots were not selling, hence fuel scarcity was imminent.

“Depots are not selling to marketers anymore reason being that the price of crude oil has soared above $60 per barrel, likewise also the scarcity of foreign currency.

“In the meeting between the Federal Government and Labour, the Government proposed to increase the price of PMS but was opposed by labour.

“So at the moment, two things are likely to happen, it is either fuel price is increased to the prevailing landing cost price which is about 190 to N200 per litre or the FG will have to resume payment of subsidy.

“Recall that in the 2021 budget, there is no single provision for fuel subsidy, except a supplementary approval by the National Assembly.

“The landing cost for PMS is currently N180per litre, so the importer importing it is likely to sell at N190 to 200 per litre, but labour said there should be no increment. So that is the crisis now. So importers are no longer importing from the international market.”

IPMAN also emphasised that the solution to the continuous fuel crisis in the country is for the government to fix the nation’s four refineries to operate at optimal capacity.

“The primary root cause of the problem is that our four refineries are not functioning and we as stakeholders have been calling on the federal government to fix the refineries so we can refined our crude locally.

“We won’t have any business with rising price of crude oil in the international market or scarcity of foreign currency. As we speak Naira is exchanging for N480 and N500 to a Dollar in the black market and this is why Nigerians are likely to experience fuel scarcity few days from now.”