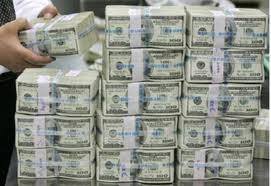 31 March 2016, Sweetcrude, Abuja – The Centre for the Study of Economies in Africa, CSEA, has projected a modest growth in Nigeria’s foreign reserves at least in the near term if the upward trajectory in the global oil market prices continues unabated.

The policy research organization, which made the projection in the latest edition of its Nigeria Economic Update released recently, hinged the positive outlook on the easing market conditions in the international crude market.

According to the Centre, while sundry measures being put in place by the government, including the directive to Economic and Financial Crimes Commission (EFCC) to investigate cases of forex speculation, to ensure improved management of the foreign exchange market and by implication, help to stem the decline in the value of the naira on account of speculative demand may not be unjustified, the imperative of having a well-designed framework cannot be under-estimated.

It noted however that, “While these temporary ad hoc measures can limit volatility in the forex market in the short term, a well-designed framework is required to manage the forex market within the medium and long term.

“Given the sustained increase in the price of crude oil in the period, the foreign reserve increased slightly by 0.14 percent ($35 million), from $27.84 billion to $27.88 billion.

“With easing market conditions in the international crude market, a modest growth in Nigeria’s foreign reserve is expected to continue, at least in the near term”, the CSEA added.

On the relatively rising oil prices at the international market which saw the OPEC’s weekly basket price increased significantly by 11 per cent from $31.53 on March 4, 2016 to $35.08 per barrel on March 11, 2016, the research organization attributed the upward trajectory in oil prices to short-term supply-side shocks in the oil market.

Specifically, the Centre noted that this was largely caused by production disruptions in Iraq, Nigeria, and the United Arab Emirates, the sharp fall in OPEC’s oil production as well as the increasing cost of production in the United States.

Appraising the performance of the nation’s capital market during the month under review, the CSEA noted that while the All-Share Index (ASI) and Market Capitalization appreciated by 0.65 per cent with ASI appreciating from 25, 820.10 points to 25,988 between March 4 and March 11, the Market Capitalization increased from N8.88 trillion to N8.94 trillion within the same period.

The research organization further reported that the huge decline in investments in the market was not unconnected to the rising risk profile of the Nigerian economy as well as the capital controls still in place in the country.