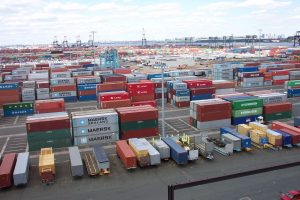 Lagos — The Nigerian Customs Services, NCS, has assured of speedy clearance of cargos from the ports and to reduce the cost of doing business in the maritime industry in line with the presidential directives on ease of doing business.

Customs Controller, Port Harcourt II Area Command, Aliyu Galadima Saidu, stated this in a statement on the performance of the command in the first quarter of this year.

Saidu, in the statement by the Command’s Public Relations Officer, Ifeoma Ojekwu, disclosed that the service generated over N25.5 billion in the first quarter of 2019 at the Port Harcourt II Area Command, Onne Seaport in Rivers State.

He said the service also seized nine containers loaded with items such as vegetable oil, soaps, machetes, wears and rice with a duty paid value of over N106 million, at the command within the period under review.

Saidu explained that the amount generated and containers seized showed a 26.3 percent increase as compared to what the command generated within the same time last year.

He assured that the command would not rest on its oars as it would strive to justify the confidence reposed on the Customs on the country, to make sure that this year achievement surpasses that of previous year.

The Onne Customs boss further said that the achievement of the command was as a result of the support it enjoys from the Comptroller-General of Customs, Col. Hameed Ali (Rtd), and his management team.