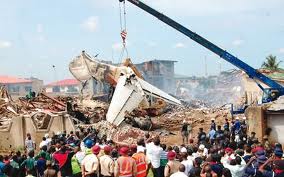 07 September 2012, Sweetcrude, Lagos – Director General of the National Emergency Management Agency (NEMA), Alhaji Muhammad Sani Sidi yesterday said that the agency would have been able to rescue some of the victims of the Dana ill-fated plane crash alive if not for the massive crowd of people which impeded the quick response of the agency.

Speaking during an interactive session with newsmen at the Officers Mess Nigerian Airforce base, Murtala Muhammed Airport Lagos, Alhaji Sidi pointed out that the major problem that NEMA faced while carrying out its rescue operations was the crowd of people that kept trooping to the scene of the accident stressing that it became so difficult for the agency to access the the crash site and to also carry out its duties under such circumstances.

“That is why we are taking time and putting efforts into sensitizing and educating the public on what to do in a disaster scene. Even if you have helicopters, they need to land in designated spots but the crash site was so crowded, so how can we operate under that kind of circumstance? Therefore the need to continue to create awareness to the public on what to do, what they are expected to do whenever there is a disaster, it is all our responsibility, it is your responsibility as journalists to do that as well as our responsibility as an agency of government,” he added.

Alhaji Sidi further noted that in disaster management, everybody has a role to play adding that if the crowd had behaved in an orderly manner, officials of the agency would have done more than what they did.

“Before the fire service could get access to the crash site, it took a lot of time, so these are some of the issues that we are here to discuss, to review what we have done right, what we have done wrong and where we need to strengthen our efforts more.”