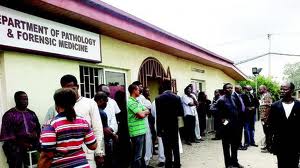 *Over non-release of corpse

24 August 2012, Sweetcrude, Lagos – THE family of the late George Moses, one of the victims of the June 3, 2012, Dana air crash has threatened to go to court if after a second mandatory DNA test, the deceased’s body is not released for burial by authorities of the Lagos State University Teaching Hospital, LASUTH.

Controversy had trailed the release of the body of the late Moses, a former Assistant Comptroller of the Federal Fire Service, since the first DNA test result failed to establish a family relationship between him (Moses) and Hannah, the candidate presented as the closest family member and next-of kin.

In a telephone interview, spokesperson for the victim’s relatives, Mr. Arilese Olajide disclosed that the family was fed up with the reluctance of the authorities to release the body to them for burial.

But as a measure to resolve the controversy, the LASUTH authorities had demanded new samples for a second forensic analysis to determine the next-of –kin and pedigree of the victim.

According to Olajide, the fresh set of samples were collected during the week from all those who participated in the first test including Hannah and the late Moses’ maternal and paternal cousins. In addition, samples were also taken from Olajide’s mother, who is the maternal sister to the late Moses. The result which is to be ready in two weeks is expected to resolve, once-and –for-all, the lingering controversy.

“Our next plan of action, if we are told there is no match and the body is not released to us would be to consult our lawyer. We have all the relevant items to use as evidence.”

Arguing that the family may have no option than to go to court, Olajide noted that reasons adduced by the LASUTH that results of first DNA samples did not match is unacceptable.

“I know that my uncle is still in the mortuary. His body had been identified earlier, I confirmed that it was the body the first time, but now I am not even being allowed to verify that claim. Now, it is only our own relative’s body including bodies of two Chinese that have issues, but most especially, it is only ours that is steeped in controversy. I say okay let me enter the mortuary and check the body again to make sure, and that if after I check I see it is not the body of Moses, we will be satisfied, but they said no.”

“He should have been buried, but because of all this DNA thing, we cannot do that. We come in everyday but are told there is nothing. This time they gave us now, we will come back, and then if it is still the same, we will take the next step.”

Hannah
Corroborating Olajide’s position, sister to the deceased, Mrs. Atinuke Okere, a police officer, sdismissed the DNA result. “We the family members don’t have any problem with Hannah. I know her late mother very well before she died. And who says that the experts who conducted the test cannot make mistake in the process of compiling the results.

Expressing sadness over the delay in the process of release of the late brother’s body, She said it was the LASUTH was compounding the family pains over the loss. She said the family was more worried by the fact that the deceased was spirit was not at rest and was begging to be laid to rest.