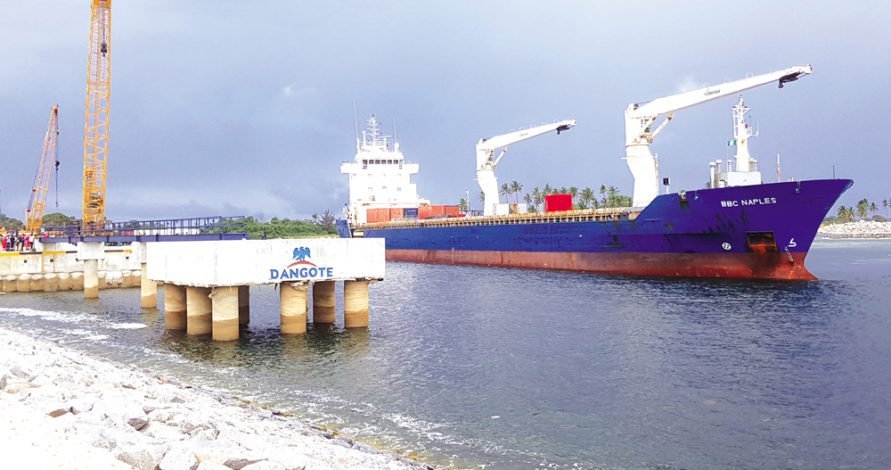 The ship, which arrived the Dangote Refinery jetty at 18.18 hours on Sunday after a 40-day voyage, loaded its cargoes for the Dangote Oil Refinery at Jebel Ali, United Arab Emirates and Richards Bay, South Africa.

Commenting on the historic ship call, the Managing Director of BBC Chartering Mideast Ltd, Mr Denis Bandura, said, “Today our vessel ‘BBC Naples’ arrived at the Dangote Lekki Jetty. It is the maiden call at the newly constructed jetty, and BBC Chartering is very proud to have partnered with Dangote Group to make this milestone a reality.

“The vessel is delivering essential equipment for the construction of Dangote Oil Refinery, and BBC Chartering remains committed to providing its full capacity at a strategic level to ensure the successful delivery of this very important project.”

The Managing Director of Hull Blyth, Mr. Christian Holm also expressed delight at the berthing of the ship.

He said, “Hull Blyth is honored to oversee the first vessel – ‘BBC Naples’ – at the Dangote Lekki Jetty. The unrelenting effort of Dangote Group, Nigerian Ports Authority, and BBC Chartering has made the opening of the jetty a reality, and it starts a new important phase in the construction of the Dangote Oil Refinery.

“Hull Blyth has a long history of logistic support to Dangote Group, and the oil refinery project has utmost priority as it will provide decisive benefit to Nigeria for many years to come.”

With a projected capacity of 650,000 barrels per day, the Dangote Refinery is expected to be the world’s biggest single-train facility upon completion in 2020.

The multi-billion dollars refinery will produce various petroleum products including Euro-V quality gasoline and diesel, as well as jet fuel and polypropylene.

The refinery project, which is expected to end Nigeria’s dependence on imported petroleum products, is projected to generate an estimated 9,500 direct and 25,000 indirect jobs.

The President of Dangote Group, Alhaji Aliko Dangote, recently said he had mobilized more than $4.5bn in debt financing for the project.