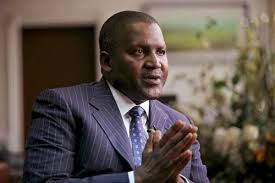 Dangote Cement Plc may start building a $400 million, 1.5 million metric tons-a-year cement plant by the first quarter of 2016, if all the necessary approvals are received, the Nigerian billionaire told reporters in Harare, the capital.

Also, Dangote Industries may invest in Zimbabwean power generation through Black Rhino Group, a $5 billion African infrastructure fund in which US private-equity group Blackstone Group LP is a co-investor.

A potential power investment in Zimbabwe could be “huge,” said Dangote, who is met President Robert Mugabe in Harare on Monday. While the billionaire has interests ranging from sugar to oil, the majority of his investments outside Nigeria have been focused on cement.

Dangote Cement recently signed contracts with Chinese construction company Sinoma International Engineering to add 25 million metric tons across 11 countries, and Dangote said at the time he expects to reach more than 70 million tons of capacity once the projects are completed. A Zimbabwean plant would help reach the next milestone of 100 million tons of cement capacity by 2020, he explained.