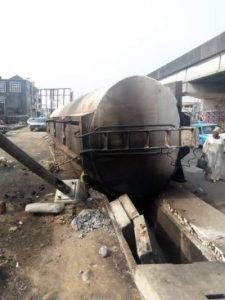 29 December 2018, Sweetcrude, Port Harcourt — Death toll from the tragic Christmas Day petrol tanker fire incident in Port Harcourt  has risen to six, following the death of three more people at the Braithwaite Memorial Specialist Hospital, BMSH, where they were receiving treatment after being severely burnt in the fire incident.

Recall that last Tuesday, December 25, a petrol tanker at Rumuola axis of Aba Road in Port Harcourt fell and emptied its products into a drainage, resulting in a massive fire explosion which claimed three lives and destroyed properties worth millions of naira.

Nine persons were severely burnt in their sleep. The injured victims were rushed to BMSH for medical attention.

Some angry family members of the victims who died at the hospital told SweetcrudeReports that the deceased were denied adequate medical attention.

A middle-aged woman, who gave her name as Margaret, said: “All of them that were rushed to this hospital have not been given proper medical attention. Three have died so far, the remaining ones are just there and we are afraid they may also die.

“There is need to evacuate them to another hospital where they could be attended to. Their situation is very critical, I want the government to assist us so that there won’t be any further loss.”

A relative of another deceased, who gave his name as Ikenna, narrated that he narrowly escaped the incident as he had travelled for the Christmas holiday, a day before the fire incident occurred.

“I am here to take my immediate younger brother’s corpse to the village for burial, I got a call while I was in the village on Tuesday that our house has been razed down by fire and my brother was burnt.

“We used to live together in the same house. His name was Saviour. I was urging him to travel with me to the village on the 24th of December but he insisted that he was coming the following day, being Tuesday, December 25th.

“But before the day will break the next morning, this evil fire came and took his life and everything in our house. He was only 15 years old. He died today as he could no longer endure the pain,” Ikenna narrated .

Meanwhile, the Independent Petroleum Association of Nigeria, IPMAN, has commiserated with victims of the petrol tanker fire.

IPMAN Chairman, Port Harcourt Refinery chapter, Mr. Emmanuel Inimgba, who described the incident as unfortunate, called on petroleum tanker drivers to ensure the road worthiness of their trucks before loading, in order to reduce disaster especially this festive season.

He said: “IPMAN condoles with the families of those who lost their lives in the fire incident as a result of the truck that fell. This is one of the thing no man would wish for, even as we are celebrating the birthday of our saviour, Jesus Christ.

“Once again, we call on all motorists both trucks to ensure that they carryout a routine check of their vehicles on a daily basis, we also wish to say that IPMAN will do all that is necessary to support the tanker fire victims.”