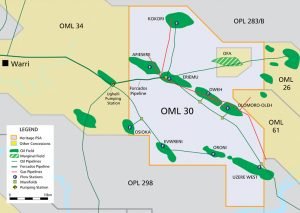 Expressing their dissatisfaction with an alleged breach of agreements by the company at a press briefing yesterday, leaders of the 111 host communities, under the aegis of the OML 30 Community Development Board (CDB), accused the company of introducing ‘the divide-and-rule’ tactics to create a crisis environment in the operation of the facilities.

Addressing journalists at the end of a meeting of the CDB and communities representatives committee, the chairman of the CDB, Hon. Morris Idiovwa alleged that the leaders of all the communities had observed that the company had started reneging on its side of the Global Memorandum of Understanding (GMoU) signed with the communities.

According to him, the leaders had cause to believe that the new development, which he said started towards the end of 2017, was a deliberate strategy to create a crisis situation in the area and a pretext for the introduction of a consultant organization, a move which the communities have vowed to vehemently resist.

Idiovwa, who spoke in the presence of all the president-general and chairmen of the various clusters from the 111 communities, however, warned that failure of the company to heed the warning against the introduction of non-government organization and consultants would force community actions, which would lead to the shutdown of oil operations in the largest facility.

“It was observed in the meeting that the OML 30 is on the brink of a crisis that could lead to the shutdown of operations in OML 30. It has come to the attention of OML 30 that the peaceful environment being enjoyed by the operators, Heritage Energy Operational Services, is at the brink of a fall, therefore the leadership has come together and has taken a decision.

“We are aware that Heritage Energy Operational Services is planning to introduce an NGO and a consultant to take over the affairs of OML 30’s GMoU and community relations. The leadership of OML 30 has unanimously agreed that we do not want to deal with any consultant or any NGO, which will come to the assets to disrupt the peace process and operation we’ve been enjoying.

“Also, the leadership of OML 30 wants to categorically state that Academic Associate Peace Works (AAPW) is not welcomed into OML 30 to deal with our communities as we are all ready to take over the GMoU as well as the community relations exercise of our communities. The leadership is competent and we are ready to deal with the company; Heritage Energy on issues bordering on community and GMoU affairs.

“We want to use this medium to appeal to the state government, the operators of these assets, to NPDC to call whichever NGO they are intending to introduce to OML 30 to withdraw them from the asset and tell Shoreline and AA Peace Works to stay away with their consultant, otherwise, the communities have decided that any NGO or consultant would be met with stiff resistance,” he said.

However, in a brief reaction to the community’s apprehension and threat, the General Manager of Heritage Energy Operational Services Limited (HEOSL), Celine Loader, said the company had ensured to maintain a mutually beneficial relationship with its host communities, adhering to the GMoU, adding that issues raised by the CDB and the communities would be investigated and addressed.

“Heritage Energy Operational Services (HEOSL), the Operators of OML30, have in the last year of operations, nurtured and sustained peaceful and mutually beneficial relationships with all OML30 Communities, working through the tenets of GMOU and its recognized governance structure which is the Community Development Board (CDB).

“There have been some unfortunate delays to the GMOU Review process, but I cannot say that that amounts to “HEOSL shirking its responsibilities” and I’m certain that any developments or allegations of vested interests working against the shared interests of the Joint Venture Partners and the Communities would be investigated and addressed in the appropriate manner”, Loader assured.