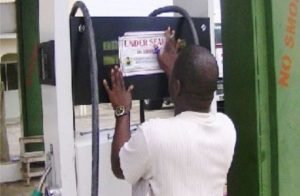 A DPR official places a seal at a fuel station

Lafia — The Department of Petroleum Resources has sealed 40 filling stations from January to date for various offences in Nasarawa State.

He said that the offences committed included under-delivery, diversion of product, lack of safety and other related offences.

According to him, “The affected filling stations, which included major and independent petroleum marketers, cut across the 13 Local Government Areas of Nasarawa State.”

The comptroller explained that the affected stations were fined and were unsealed after the payment to the Federal Government.

He said that the erring stations were punished for breaching the laws guiding their operations, adding that DPR would not compromise the set standard for filling stations operation.

Meanwhile, Muhammad-Bima disclosed that his office had also issued 15 licences for the operation of filling stations, while approvals were given for the construction of 20 stations across the state.
Also Read: Oil falls below $64 on Saudi oil restart prospects, economy concerns

He explained that there was always fuel at filling stations, therefore, there was no need to patronise black markets.

“If you buy fuel from filling stations and your car developed any problem or fault from it you can go to that filling station and report, unlike if you buy from roadside unregistered market,” he said.
like us facebook