Desperate for fuel, Venezuelans steal PDVSA crude and make their own gasoline 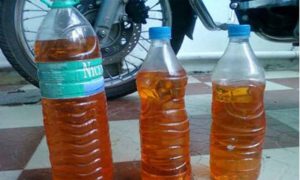 News wire — Venezuelans, desperate for fuel after months of shortages, have begun stealing crude from idled fields owned by state oil company Petroleos de Venezuela (PDVSA) and distilling homemade gasoline, according to two PDVSA workers and a half dozen people familiar with the practice.

The amount of crude stolen is a tiny fraction of Venezuela’s output. But the activity is testament to the crises at PDVSA, which can no longer supply the country’s population with fuel.

Venezuela’s once-formidable 1.3 million barrels per day (bpd) refining network has collapsed, oil and refining installations have little security or maintenance, and the firm is unable to retain qualified workers as salary values erode.

The company has hit a new low this year. Under pressure from U.S. sanctions – part of Washington’s effort to oust President Nicolas Maduro – Venezuela’s crude output fell to just 397,000 bpd in September, down from 1.2 million bpd before the sanctions were imposed in January 2019 and the lowest level since the 1930s.

The sanctions have targeted gasoline imports, forcing Venezuelans to wait in snaking lines outside gas stations. Many citizens regard that as a bitter indignity in an OPEC producer, which has, by some measures, the world’s largest crude reserves.

The supply chain for the so-called “artisanal gasoline” begins at oil fields such as La Concepcion in the western state of Zulia, which produced more than 12,000 bpd of high-value light crude 15 years ago.

The field has been idled for two years as PDVSA, once one of the top 10 oil companies in the world by crude output and a major exporter, has collapsed into a shell of its former self.