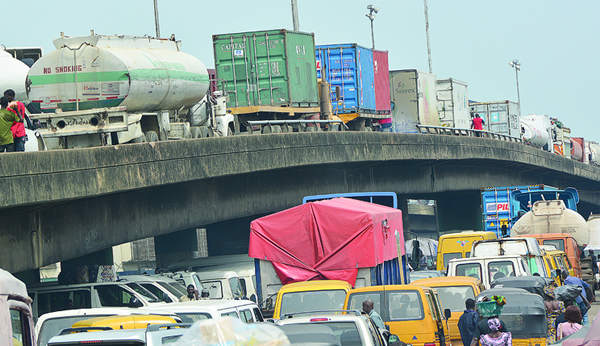 Lagos — Despite the renewed efforts by government to solution to Apapa traffic, there seems to be no end in sight to the traffic situation along the road as over 5,000 containers belonging to various manufacturing factories are currently trapped at the Tin-Can Island port.

The Managing Director of an international beverage company told journalists that his company has run out of the substrate used in manufacturing one of its soft drinks.

“We exhausted our stock and the container loads we imported arrived more than six weeks ago but have not been able to leave the port,” the Managing Director, who does not want to be identified, said at a closed-door meeting with select journalists in Lagos on Wednesday.

Also, various traders who imported goods to sell during the yuletide season have been caught in the traffic snare, as their commodities have been unable to leave the port. Many of such traders stand the risk of losing millions of naira if they are unable to sell the goods before Christmas.

Also on Friday last week, the FMOT Permanent Secretary, Dr. Magdalene Ajani, held a meeting with stakeholders in Lagos, outlining various measures to address the gridlock. The measures include the disbandment of the Presidential Task Team on Apapa Gridlock and the reconstitution of the traffic management system at the Tin Can Port access road.

The Permanent Secretary also directed the contractor handling the repair of the Apapa-Oshodi Expressway to reopen the road leading to the port to clear the gridlock. However, the contractor has failed to comply with the order five days after it was issued, while security operatives still mount toll points along the road to extort various sums of money from hapless truckers.

Journalists that monitored the situation around Tin Can Island environs on Wednesday observed the long queue of trucks waiting to enter the port with the road from Tin Can Second Gate to Liverpool taken over by trucks trying to exit the port. The situation is not different from the Tin Can First Gate to PTML and Coconut areas.

The development has also led to a sharp rise in haulage cost by truck drivers.

A clearing agent who operates at the Tin Can Island Port, Emmanuel Onyeme, said despite the disbandment of the Presidential Task Team, the traffic situation still persists due to road blocks mounted by security and traffic management officials as well as the failure of the government to open up the completed portion of the road as promised by the FMOT Permanent Secretary on Friday.

This, he said, has continued to hinder free movement and exit of cargoes from the port with Police officials and other security operatives still cashing in on the blockade created by the contractor especially at night.

He said, “The traffic situation still remains the same. Although they said they have disbanded the Presidential Task Team, this same set of people are coming out in the night to carry out their normal shady deals.

“If the government said they have banned the Presidential Task Force, let them open the road so that we have free movement. With the blockade on the road, how will the road be free? If you come to Tin Can today, the containers that are exiting are not more than five yet people are paying demurrages.

“We are begging; let the government open up the road along Tin Can access road. The contractor on that road is not helping matters.

“For cargoes to exit is difficult because they have blocked everywhere. Right now, the only solution to this problem is for the government to call the contractor to order. They need to open the roundabout at the Tin Can First Gate so that containers coming out, instead of exiting through the Second Gate, will take the express.

“Cost of transportation has remained the same. As at this morning, the cost of haulage form Tin Can to Ladipo is N1.7 million because there is no road and the whole place is blocked.”

Also speaking, Chairman, Association of Nigerian Licensed Customs Agents (ANLCA), Tin Can Island Chapter, Segun Oduntan, said there hasn’t been any respite on the road despite the Minister’s visit to the Tin Can Island Port last week.

He lamented the pain and frustration agents and importers are going through, especially those who have their goods trapped at the port as a result of the chaotic gridlock along the Tin Can Port corridor.

“You need to see how importers and agents are crying, especially those who have goods that are trapped at the port with the high cost of demurrage. So what intervention has the minister made?

“The Minister’s visit has not changed anything because when they came for the inspection, they did not inform any stakeholder. We are the ones that can give the Minister first hand information. How can a contractor be bigger than the Ministry? They should just open the road,” he said.