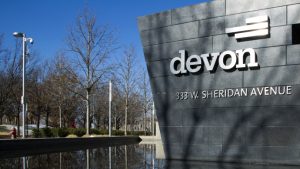 The company reported production of 532,000 barrels of oil equivalent per day (boe/d) in the fourth quarter ended Dec. 31, while analysts had expected 527,060 boe/d, according to IBES data from Refinitiv.

Oklahoma-based Devon also said its board had authorized the sale of its assets in Canada and in the gas-rich Barnett shale patch in the United States, to become a pure-play oil producer.