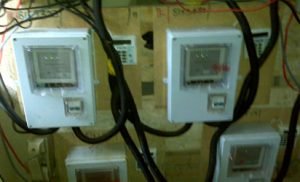 Lagos — The Nigerian Electricity Regulatory Commission, NERC, has said the electricity distribution companies or Discos may replace faulty and obsolete meters for their customers under the National Mass Metering Programme, NMMP.

The commission made this known in Order No. NERC/246/2021 signed by its Chairman , Mr Sanusi Garba and Mr Dafe Akpeneye, Commissioner Legal, Licensing and compliance on its website in Abuja.

NERC said that the Order No. NERC/246/2021 took effect from March 4. “DisCos may replace faulty/obsolete meters under the National Mass Metering Programme (NMMP) but must be done in strict compliance with the Metering Code and other regulatory instruments of NERC,‘’ it said.

According to NERC, the commission started receiving complaints from metered end-use customers in the fourth quarter of 2020.

It said the period was when all stakeholders were preparing for the implementation of the NMMP.

NERC said the complaint by customers was that they had been served meter replacement notices by Discos.

The commission said that it had reviewed the customer complaints adding that Discos were responsible for the installation and replacement of meters for end use customers. It ordered Discos to grant priority to the metering of unmetered customers under the NMMP.

“The Commission shall be copied on all replacement notices issued to end-use customers for the purpose of conducting random reviews of the replacement exercise. “New meters must be installed upon the removal of the faulty/obsolete meter.

“And under no circumstances shall the customer be placed on estimated billing on account of the Disco’s failure to install a replacement meter after the removal of the faulty/obsolete meter,’’ NERC said.

It said that the customer and Discos representative should jointly note the units on the meter being replaced and the customer must be credited with the units within 48 hours after installation of the meter.

NERC said that customers should only be billed for loss of revenue where the Discos established meter tampering, by-pass or unauthorised access as contained in NERC Order/REG/ 41/2017 on Unauthorised Access, Meter Tampering and Bypass.

The commission said that activation tokens should be issued to customers immediately after replacement of the faulty/obsolete meter.

It said Discos should file monthly returns with the commission on the replacement of faulty/obsolete meters along with their proposal for the decommissioned meters.