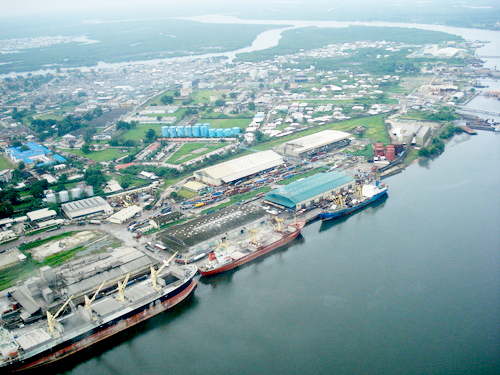 Port Harcourt — Dockworkers under the aegis of Maritime Workers Union of Nigeria, MWUN, on Monday shutdown activities at the Port Harcourt seaport, in protest over protracted disputes between the Nigerian Ports Authority, NPA and its terminal B operator at the port, Bua Ports and Terminals.

The protesting dockworkers disclosed that as a result of the dispute, NPA has not allowed ships to berth at the four quays operated by Bua Ports and Terminals in Port Harcourt seaport, in the last two months.

The protesters numbering over 100 with placards with different inscription such as, “NPA allow dockworkers to work”; “If NPA does not allow Bua to work, then there will be no discharge in Port Harcourt port”; “Injury to one dockworker is injury to all dockworkers, we don’t have any other business other than ship work”, amongst others.

Leader of the protest and MWUN National Trustee, Dockworkers branch, Comrade Waite Harry, explained that there has been an ongoing arbitration between NPA and Bua in London.

Harry called on the Managing Director of NPA, Hadiza Usman, not to allowed her personal issues with Bua, to affect the livelihoods of dockworkers.

He disclosed that over 20 ships are already at anchorage waiting to berth, but no place to berth due to the dispute; emphasising that injury to one dockworker is injuring to all dockworkers nationwide.

“The disagreements between NPA and the management of Bua Ports and Terminal management has brought untold hardship to the dock workers in Port Harcourt seaport. For more than two months now, NPA has directed that no ship should berth at Bua terminals.

*The protesting dockworkers in Port Harcourt port on Monday.

“You can agree with me that when two elephants fight, it is the grass that suffers, and this is a very critical period, schools have resumed, school fees, children welfare, house rents etc, yet all dockworkers at Bua Ports and Terminals have not been working because of the disagreements, as NPA directed that no ship should berth at Bua terminals in Port Harcourt port.

“Over 20 ships are waiting, but no place to berth. We are of the opiniok. That their disagreements should be handled quickly and NPA should allow ships to berth at Bua terminals, so that the dockworkers will go about their normal duties, so as to be able to take care of their families.

“Bua is creating jobs for youths and Bua factories must be allowed to function, that is the stand of MWUN.”

Also, MWUN District Chairman, Port-Harcourt port, Mr Tony Wokocha, disclosed that dockworkers do not even understand the nature of dispute between NPA and Bua management, but their concerns are that dockworkers should get back to work.

Wokocha appealed to NPA to allow ships to discharge in Bua terminals, while they resolve their differences at the London arbitration.

“The truth is workers are almost dying. We are dockworkers and we don’t have any business other than ship work. We have more than 20 vessels at fairway buoy waiting to berth and we will not continue to wait.

“All we are saying is we want to go back to work, we are dockworkers and we are casual workers, nobody pays us at the end of the month, rather it is from what we worked out that our wages are being paid.

“There is congestion in Lagos ports, they (NPA and Bua) should resolve their issues and not to allow it affect the common man.”