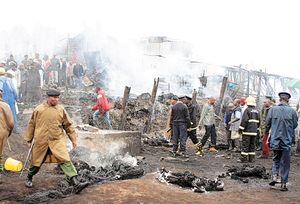 12 September 2011, Sweetcrude, Nairobi- At least 75 people were killed and more than 100 injured when a leaking petrol pipeline exploded in the Kenyan capital, Nairobi, turning part of the city slum into an inferno.

Flames leapt 300 yards from the pipeline, setting shacks ablaze and incinerating scores of people. Reporters saw clusters of charred bodies and blackened bones at the site. Some burnt bodies floated in a river.

“I’ve lost count of the number of bodies,” said Wilfred Mbithi, a policeman. “Many had dived into the river trying to put out their flames.” Residents said the river caught fire after fuel leaked into it. Homes had been built next to the pipeline, they said.

Joseph Mwangi, 34, said he was feeding his cow when people went running past him, calling out that there was a leak in the pipeline.

Others started drawing fuel and he was going to fetch a bucket to get fuel too when he heard an explosion. Moments later, Mr Mwangi discovered two small charred bodies in the burnt wreckage of his home. “Those were my children,” he said, collapsing on the ground sobbing.

At the time of the explosion, the narrow, twisting alleyways were packed with people on their way to work or school. The flimsy homes of corrugated iron sheets would have offered little resistance to the blast.

The Red Cross was conducting search and rescue operations and had set up two tents for first aid and counselling. At least 112 burn victims were taken to Kenyatta National Hospital. Many children were among the victims, said Richard Lisiyampe, the head of the hospital. Most had burns covering more than a third of their bodies, he said. Some were unrecognisable, said St John Ambulance spokesman Fred Majiwa.

The cause of the explosion is unclear. The pipeline is operated by the Kenya Pipeline Company.