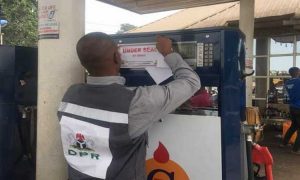 Eket, Akwa Ibom State — The Department of Petroleum Resources in Akwa Ibom says it had sealed off 13 petrol stations for nonrenewal of licences and under-dispensing of Petroleum products in Eket.

The Operation’s Controller of DPR in Eket, Mr Tamunoiminabo Kingsley-Sundaye, told newsmen about the closure at the routine surveillance of filling stations in Eket on Tuesday.

He said that one out of the 13 filling stations was operating illegally and did not have DPR operating licence in the state.

“”I will take under-dispensing of petroleum product very seriously because people should have what is equivalent to the product they buy,” he said.

He noted that the department was on nationwide actions to ensure that oil downstream facilities and gas facilities adhered to guidelines, standards and regulations.

““The exercise we are embarking on now virtually in all the states and all the offices of DPR are carrying out same actions,” Kingsley-Sundaye said.

The Operation’s Controller said that the department would also check gas refilling plants, white depot gas and depots to ensure that they were operating to set standards, safety wise and environmental compliance.

Kingsley-Sundaye further said the department was also carrying surveillance for housekeeping to ensure that the facilities were up to standard.

Also Read: Oil slips to around $63 as Iran concerns fade for now

He, therefore, warned Petroleum marketers to desist from selling products with DPR seals, saying that anyone caught would pay a fine of N2 million.

“”We are involving robust media coverage so that the public will be aware of the actions DPR is taking.

“”The media coverage is also to give signs to others who are doing similar business to ensure that people do business according to the rules of the business.

““The department wants to give the public hope and assurance that the stations that pass through those rigorous tests, their product will be safe.

“And their facilities would be safe for them to go and transact their dispensing businesses,” he said.